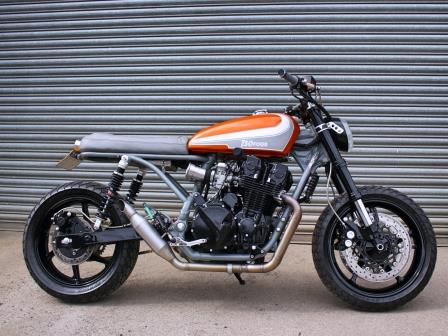 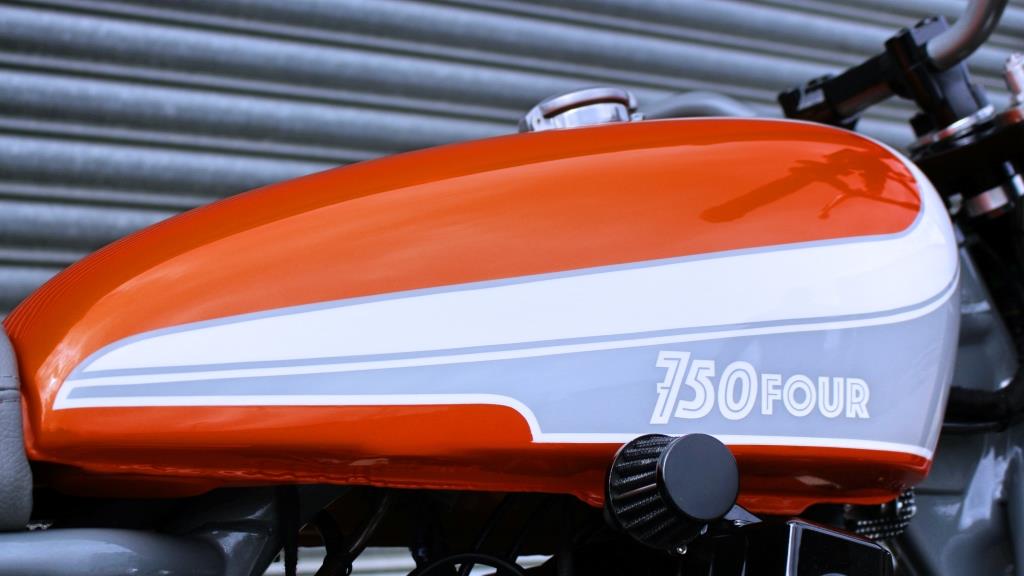 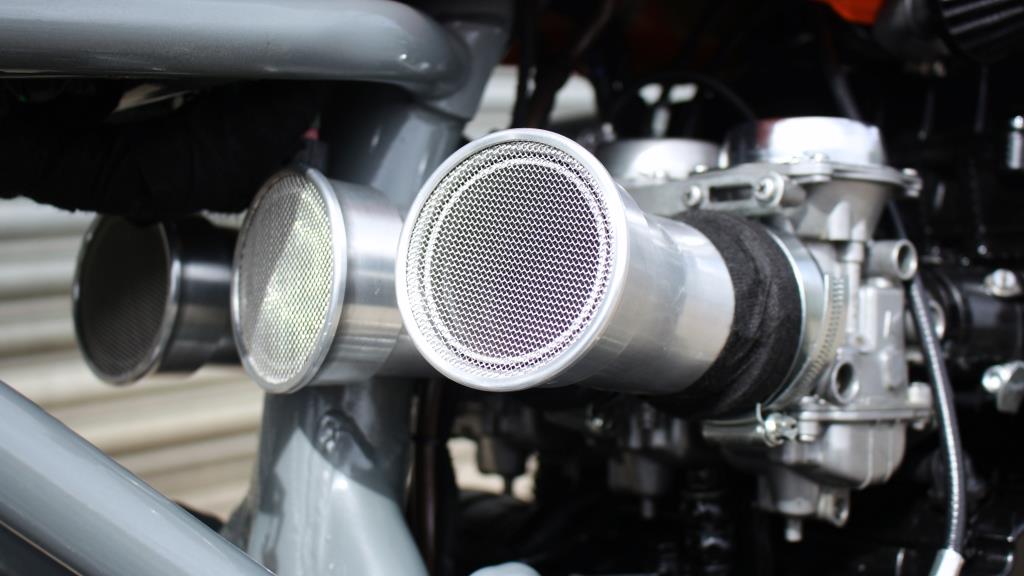 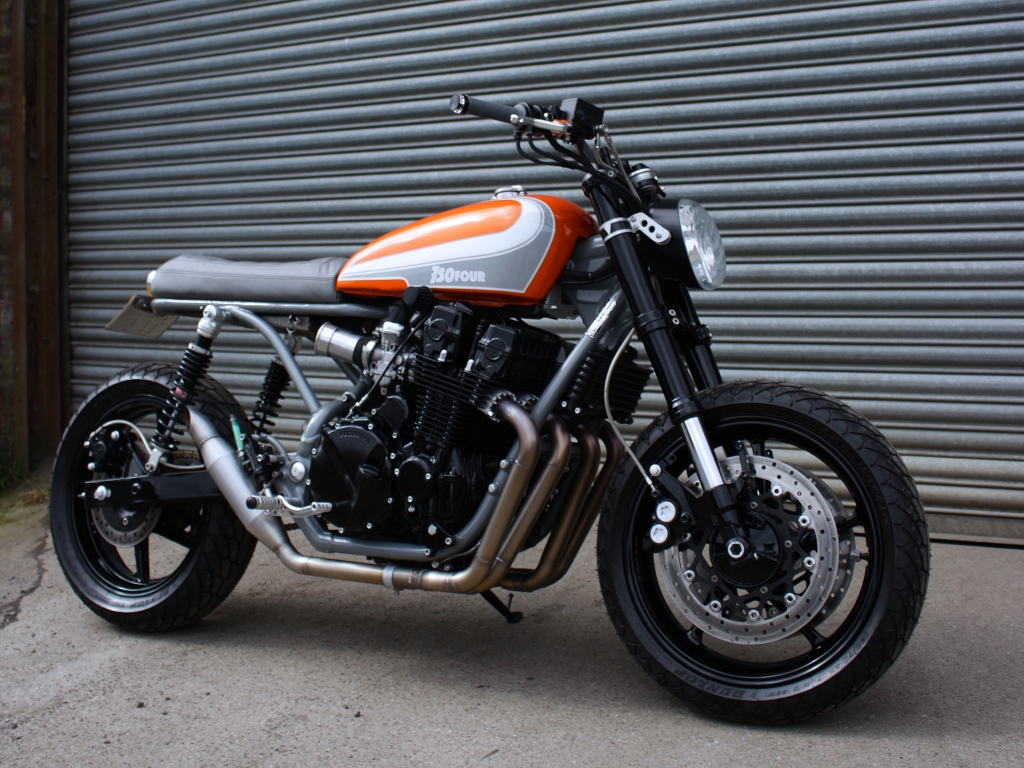 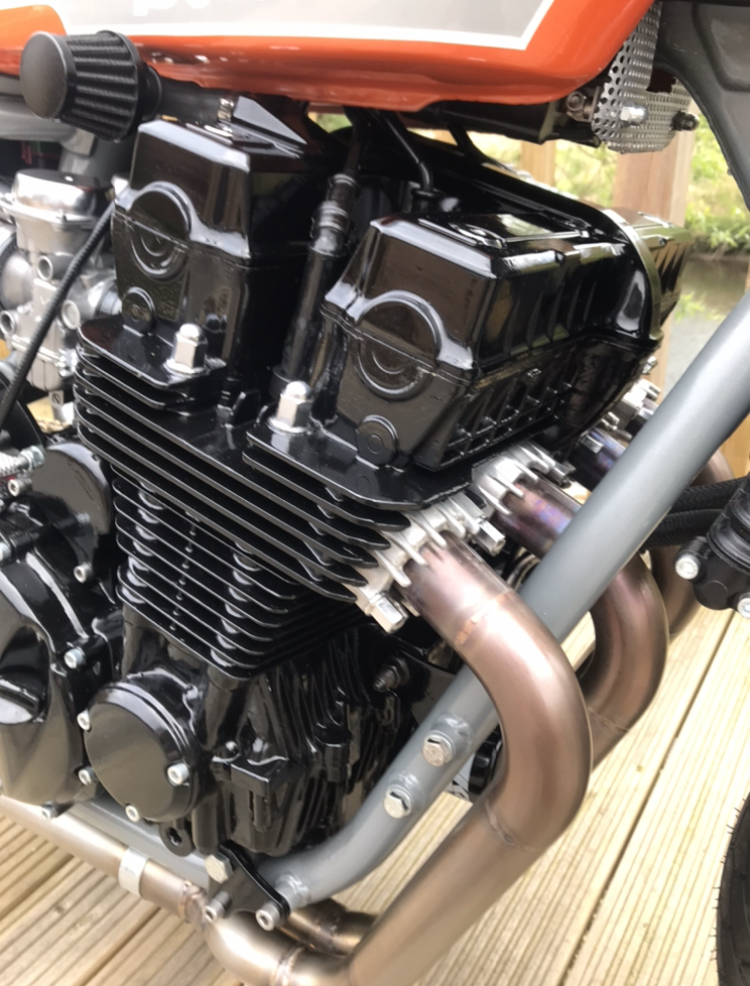 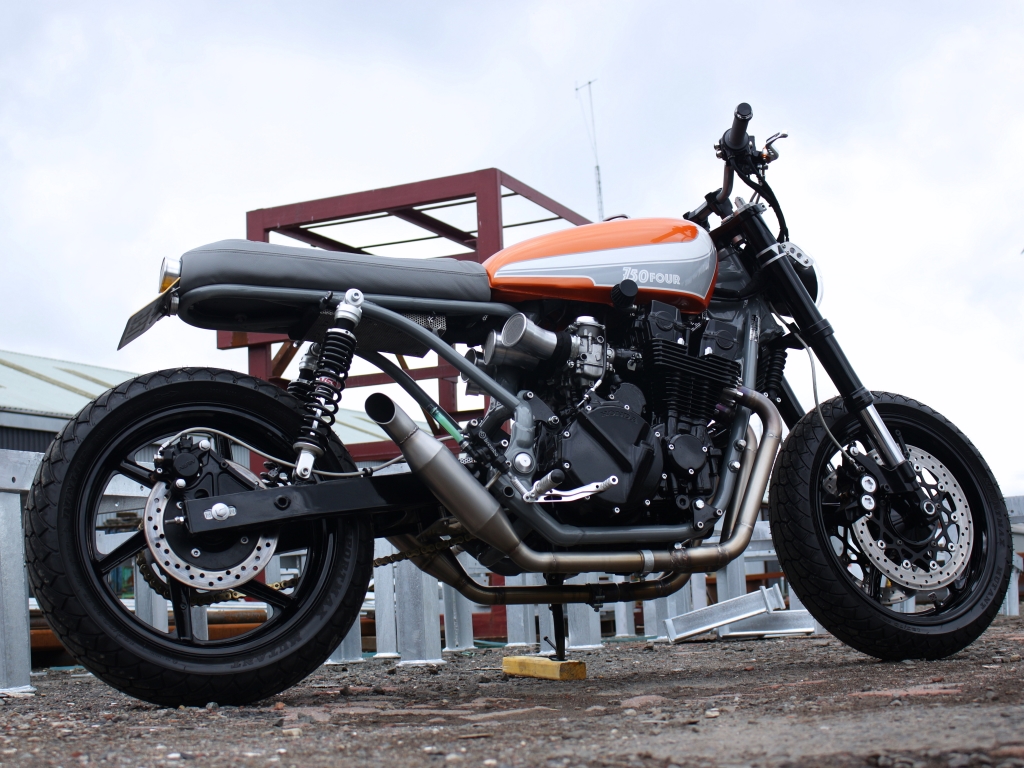 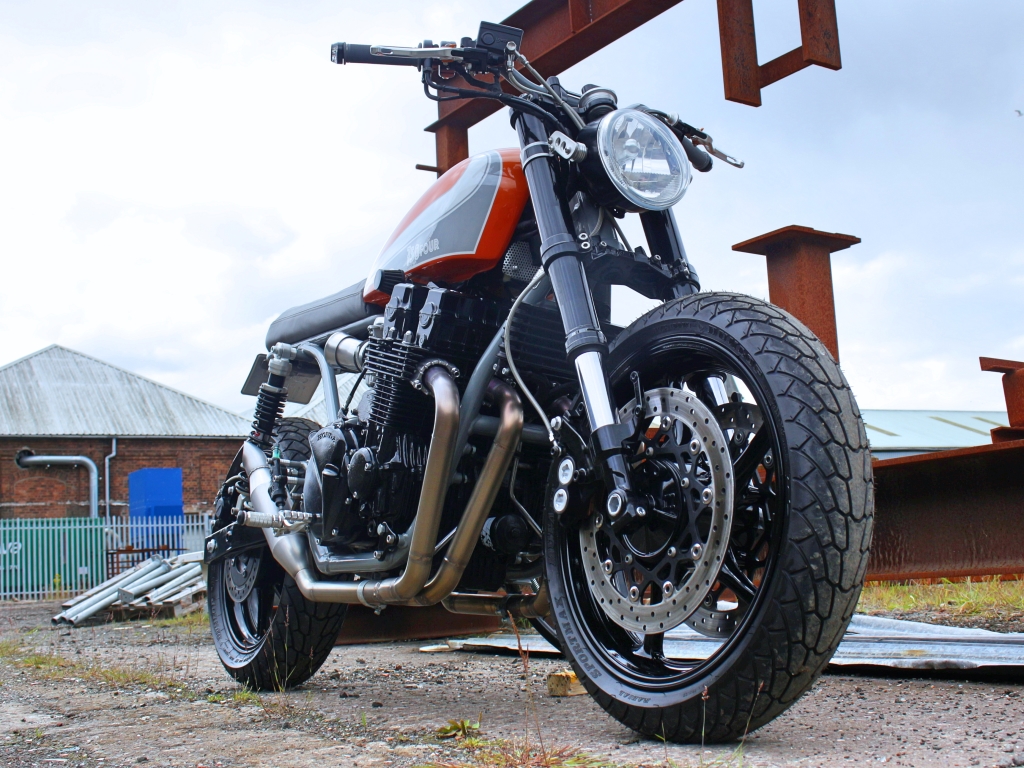 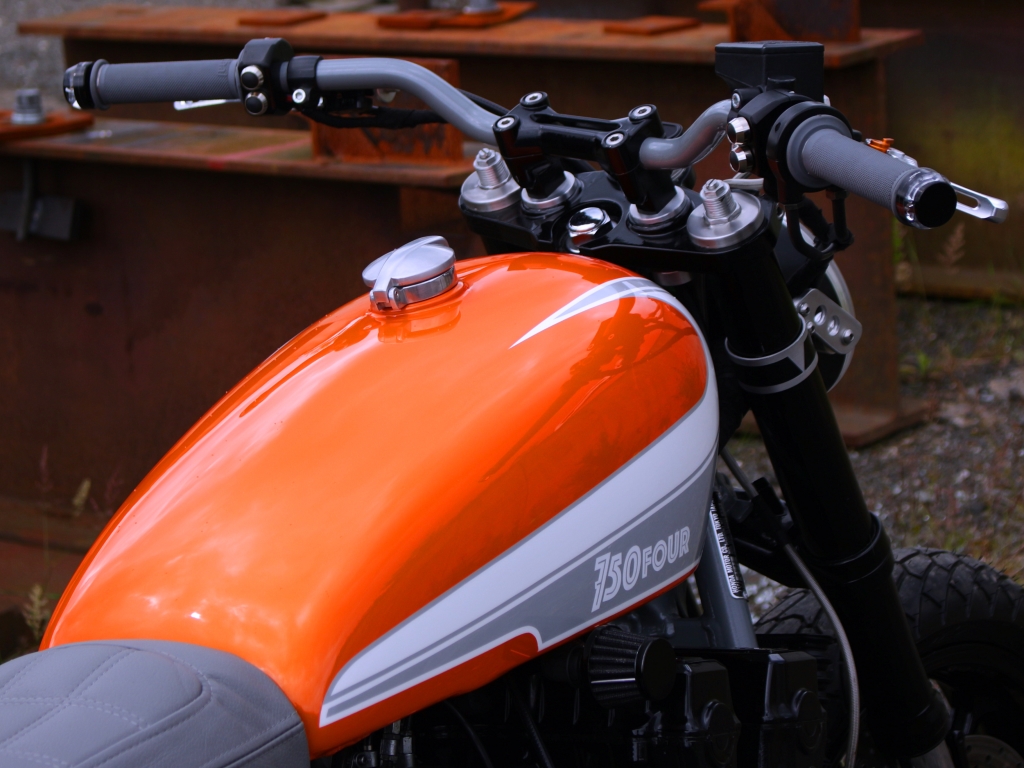 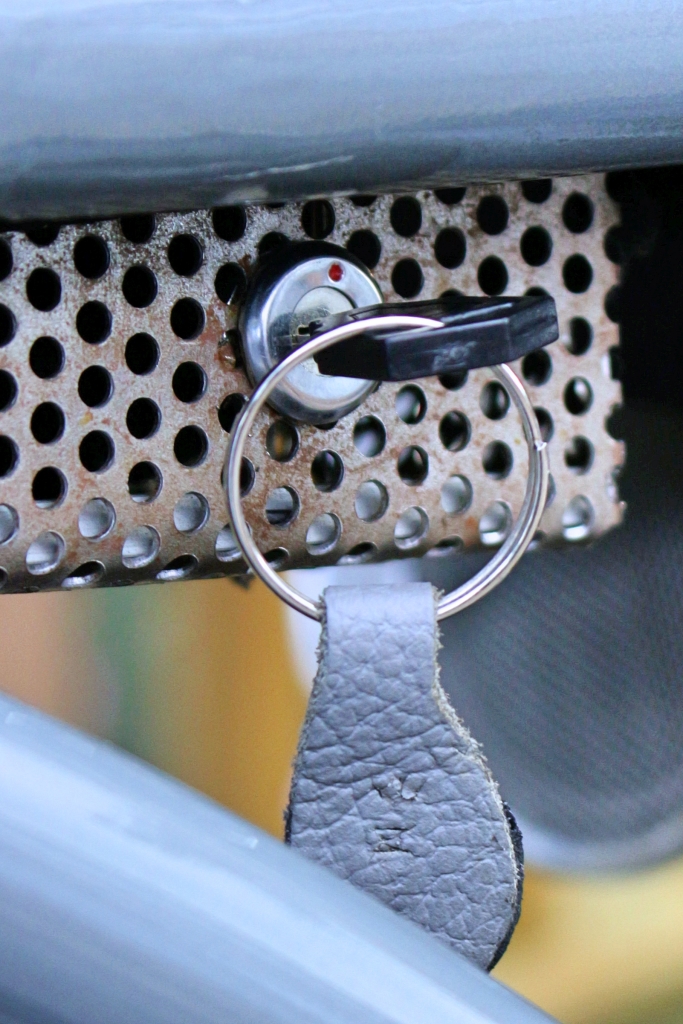 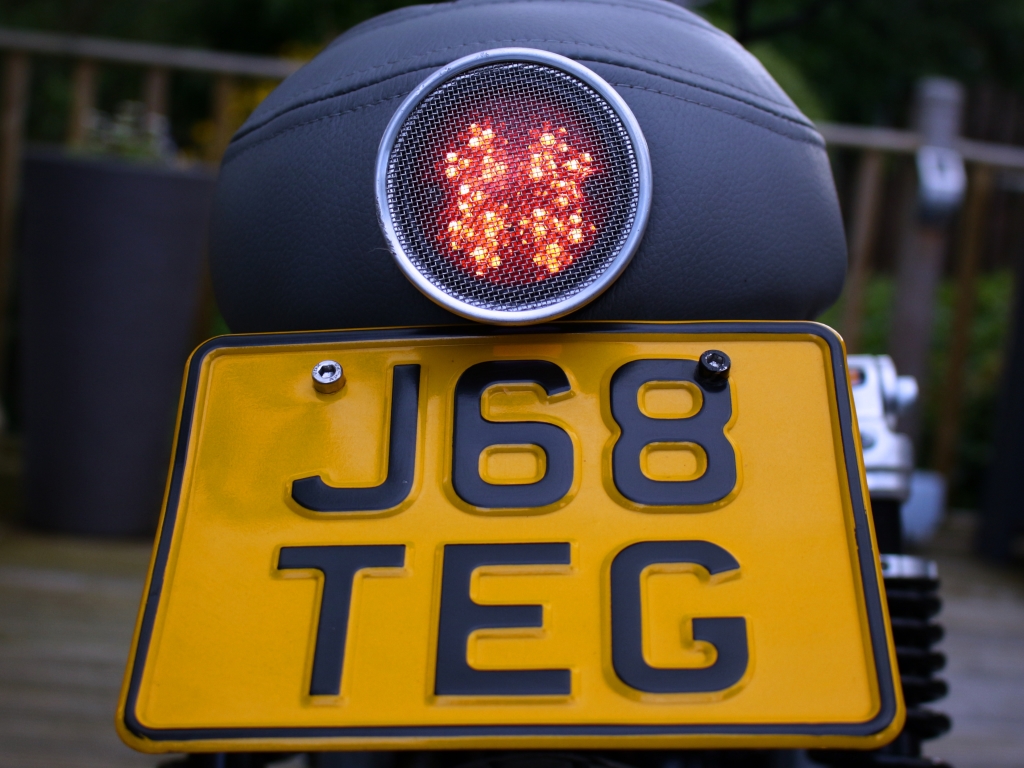 For sale is my new build Honda CB750. A professional complete one off build featured in Built Magazine issue 29.

More than just some parts added, this build was meticulously planned from the start.

Starting with the base bike I bought the nicest Honda CB750 I could find. A low miles and full service history bike from 1992.

Starting with the frame.  The rear of the frame was modified with a new narrower top tube giving a straighter line than standard and a uniform loop with cross bracing underneath setting it apart from the original which was splayed out towards the rear, furthermore swooping lines from the centre of the frame to the shock mounts were added to give this refined shape.

The whole frame was de-tabbed with everything removed to give a smooth uncluttered appearance and finished along with the handlebars in BMW Mini Moonwalk Grey metallic.

The swingarm was modified with relocated lower shock mounts to accept a collet type shock mount so the rear brake hose could route between this keeping it clutter free and also so the rake would match the front rake from the front end conversion.

The front end is from a 2015 Yamaha Fazer 1000 which is complete with USD forks, brakes and calipers, wheel and Yamaha top and bottom fork clamps professionally mated to the standard Honda steering tube. Not an easy task but something that gives a seamless look.

The tank is a US spec new old stock Yamaha xs650 albeit modified to accept an alloy Monza cap, single fuel tap, new tank mounts and hand formed metal inlay which was welded in to cover the front section standard cut out and exactly fit the frame tube shape of this bike. The lettering 750Four and tank paintwork are all done by hand and no decals used. All painted to show standard.

The long list of machined parts on this bike were created by Beida75. The exhausts for example are not perfectly straight from the factory at the downpipes so we created this exhaust in full stainless to precise standards and yes it sounds awesome albeit not too loud. The list of further parts is comprehensive and include the bespoke foot controls, shock mounting bushes. Headlamp bracket to house the new Harley Davidson V Rod headlight, the internally supported rear light fitted into the seat and made to match the carb intakes, the custom mounts for the Renthal low rise bars and on and on.

The rear indicators are discretely housed just behind the rear shocks but shine very bright when lit. The front are located on the ends of the handlebars.  The speedo, rev counter and warning lights housed on a solid billet housing which has the signature 3 lines cut in which is themed throughout the bike.

As you would expect from a high end build this bike has been built with clean simple well planned detail, in fact many are not apparent at first glance such is the quality of this build. The engine was in fine fettle but never the less fully checked over, the engine fins have been rounded to give a nicer appearance and perfectly painted to high detail in gloss black. All fasteners, fixings, cables, chain sprockets, cush drive and such have been replaced throughout.  Motogadget electronics feature strongly on this build, the front brakes are Yamaha Fazer 1000, the rear is from a Honda Hornet. Brake lines have been upgraded to stainless braided and the master cylinders both upgraded to Brembo.  The seat is made on a metal base and beautifully covered in a matching grey.  The leather coming from the same supplier as Aston Martin use.

The wiring has been simplified and run very neatly throughout, the carbs were vapour blasted and fully rebuilt and the bike was expertly set up on the dyno where it showed higher than factory figures.

The bike was built with the 750four logo upon the tank, the one off frame, the upgraded components, the rounded engine fins to name a few to create the often asked what is it?

“An absolutely flawless professional build with only around 100 miles completed, the detail and finish are of show winning standard, the bike has been expertly built with no corner cutting on cost or safety.”

" the paintwork is actually more gold than orange. The photos seem to have made it look more orange than it is.  I am happy to send a detailed video showing the actual colour and further details within the bike "

I am happy to assist with shipping within the UK and Europe at buyers cost.