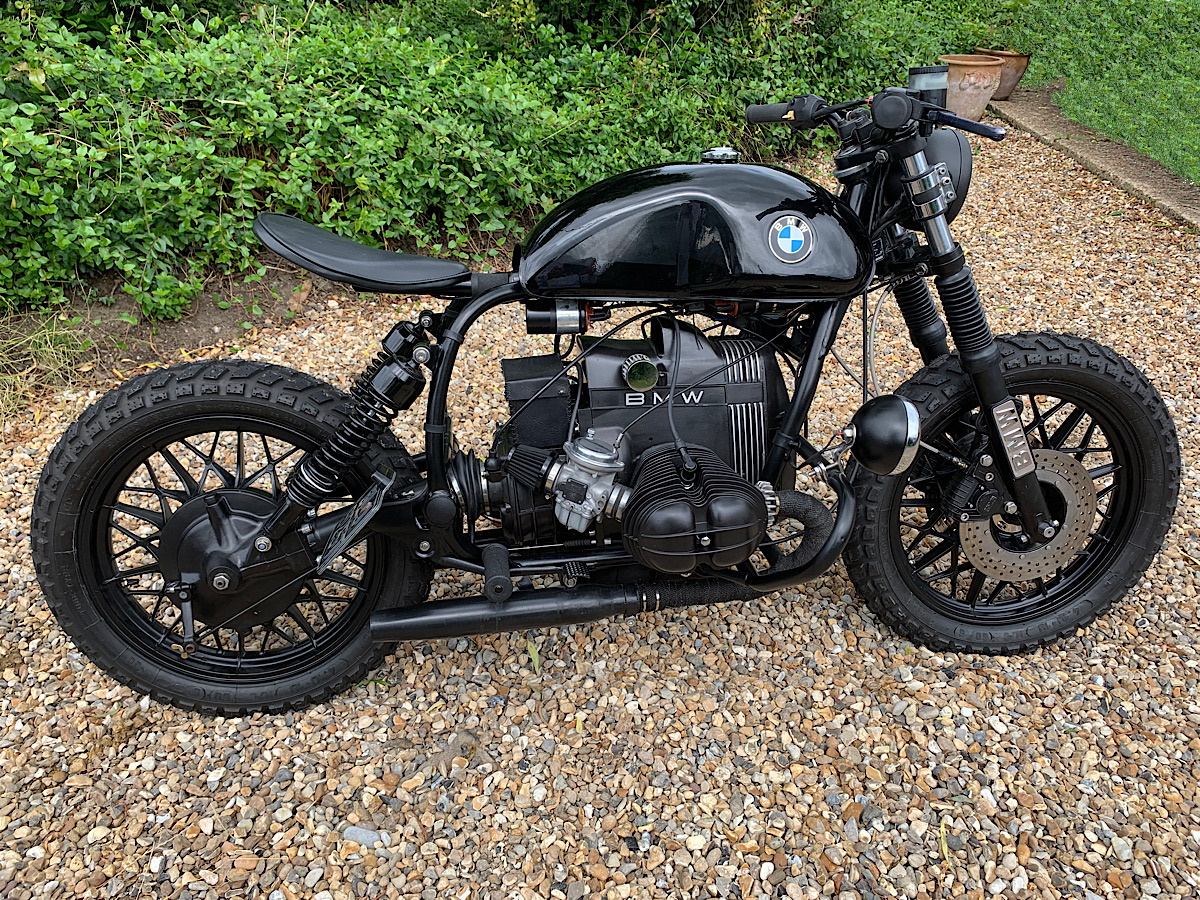 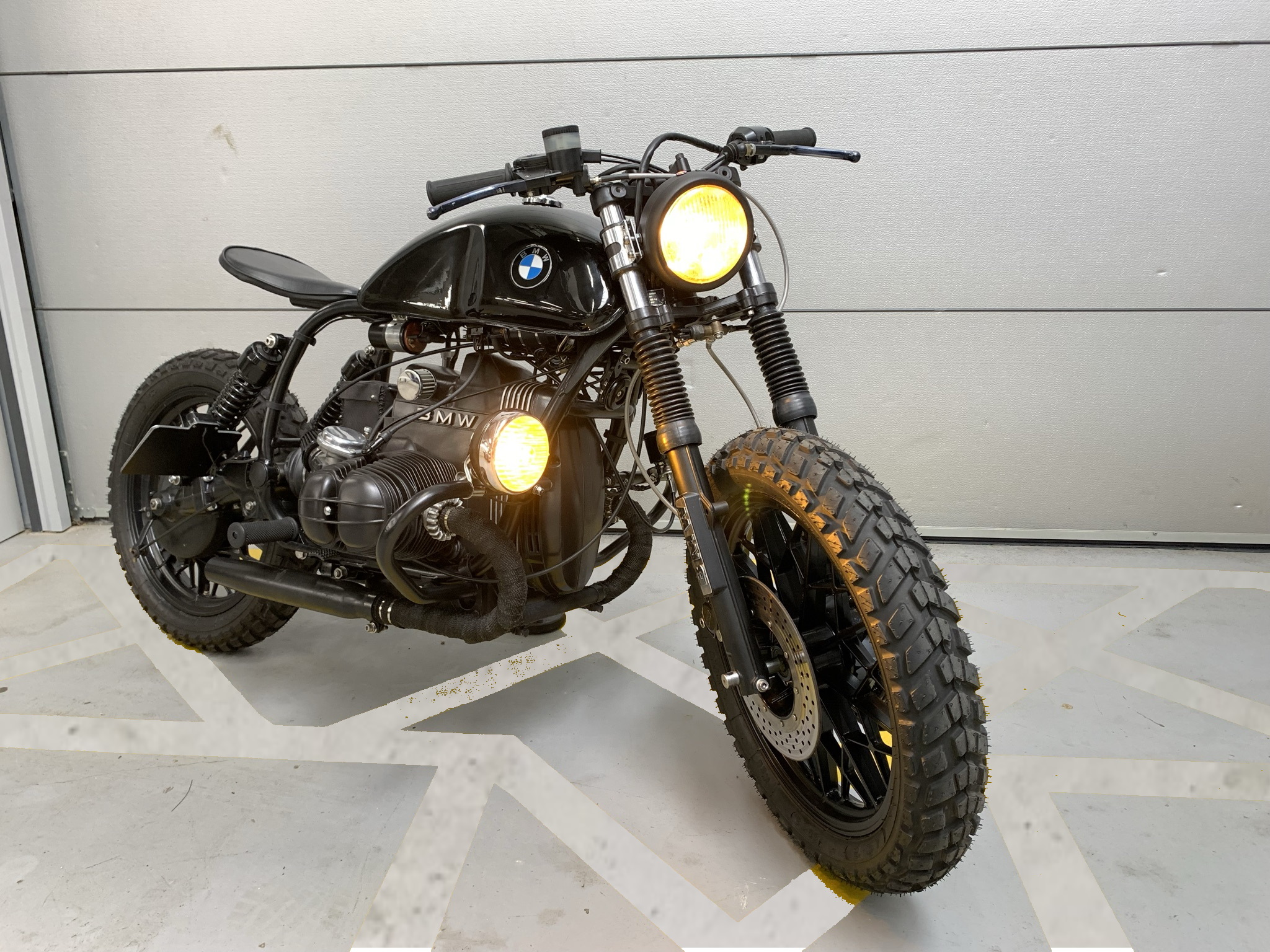 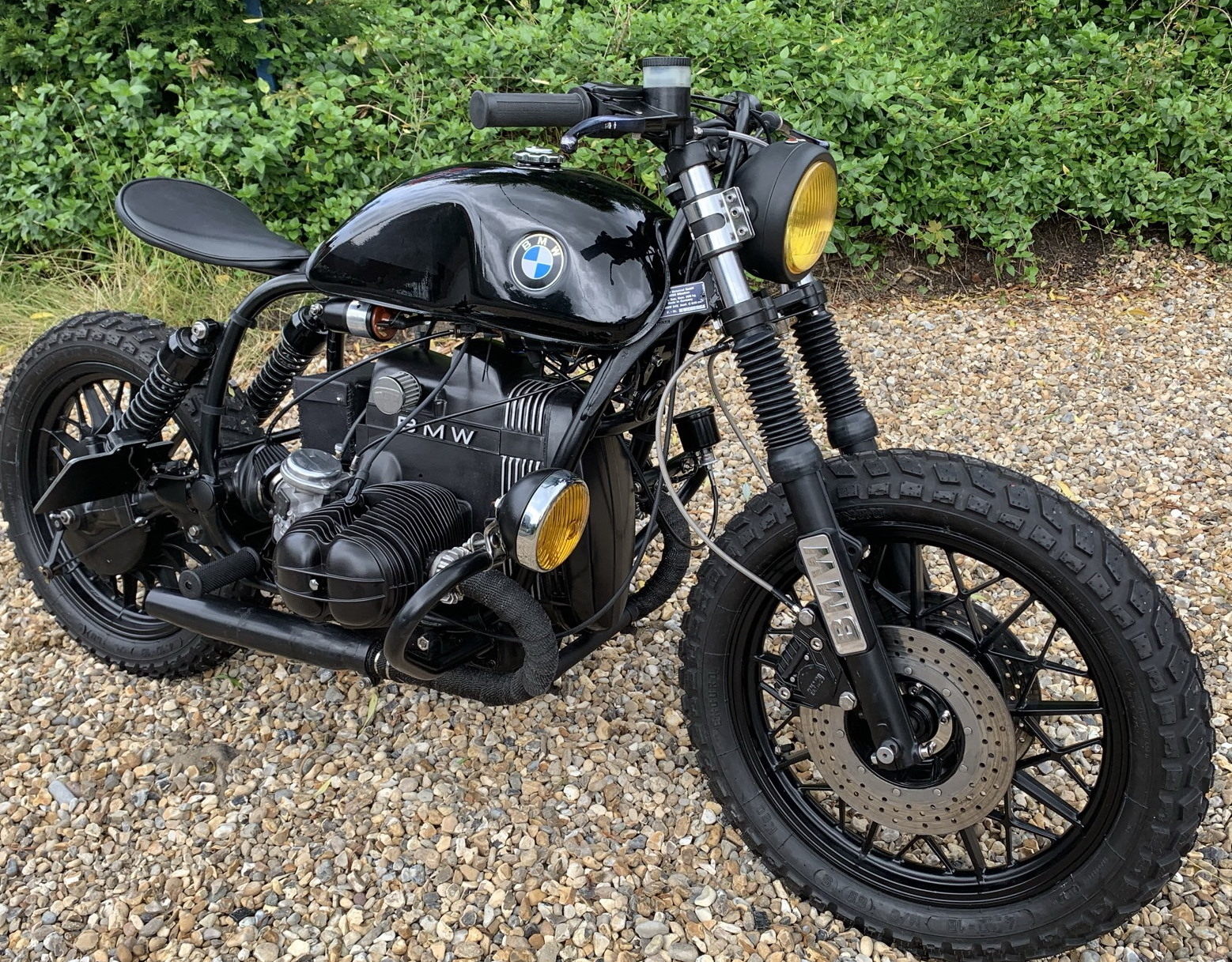 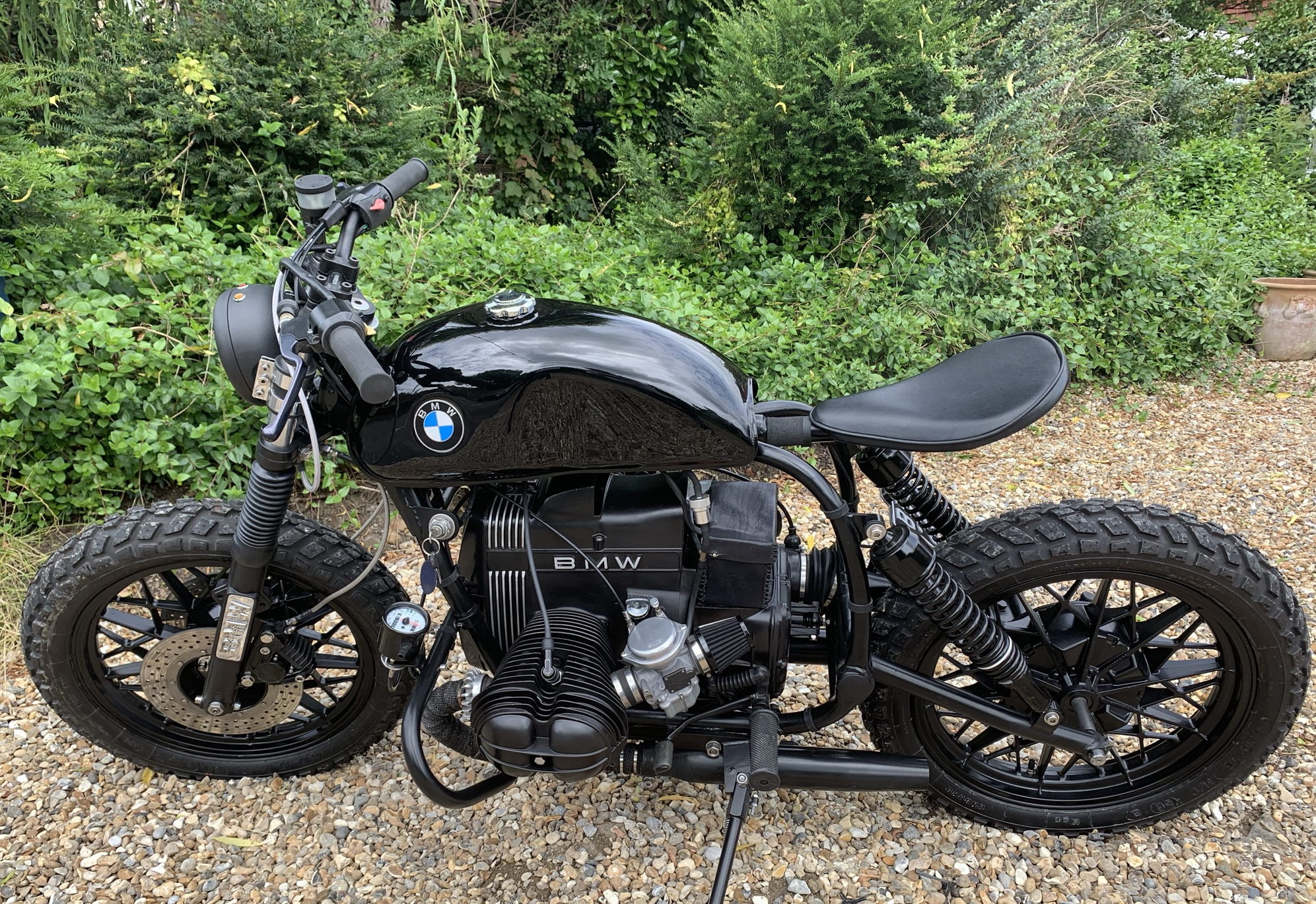 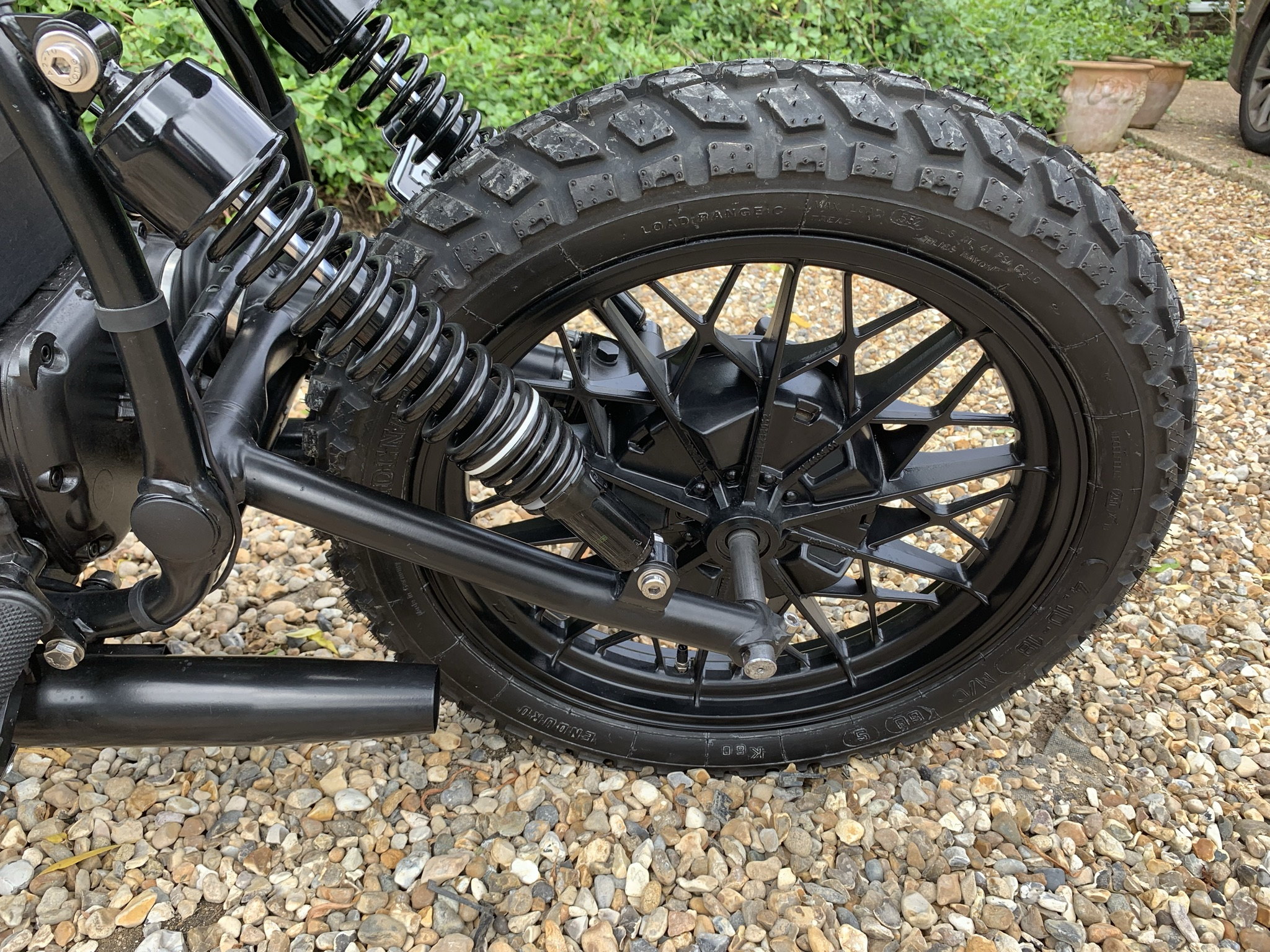 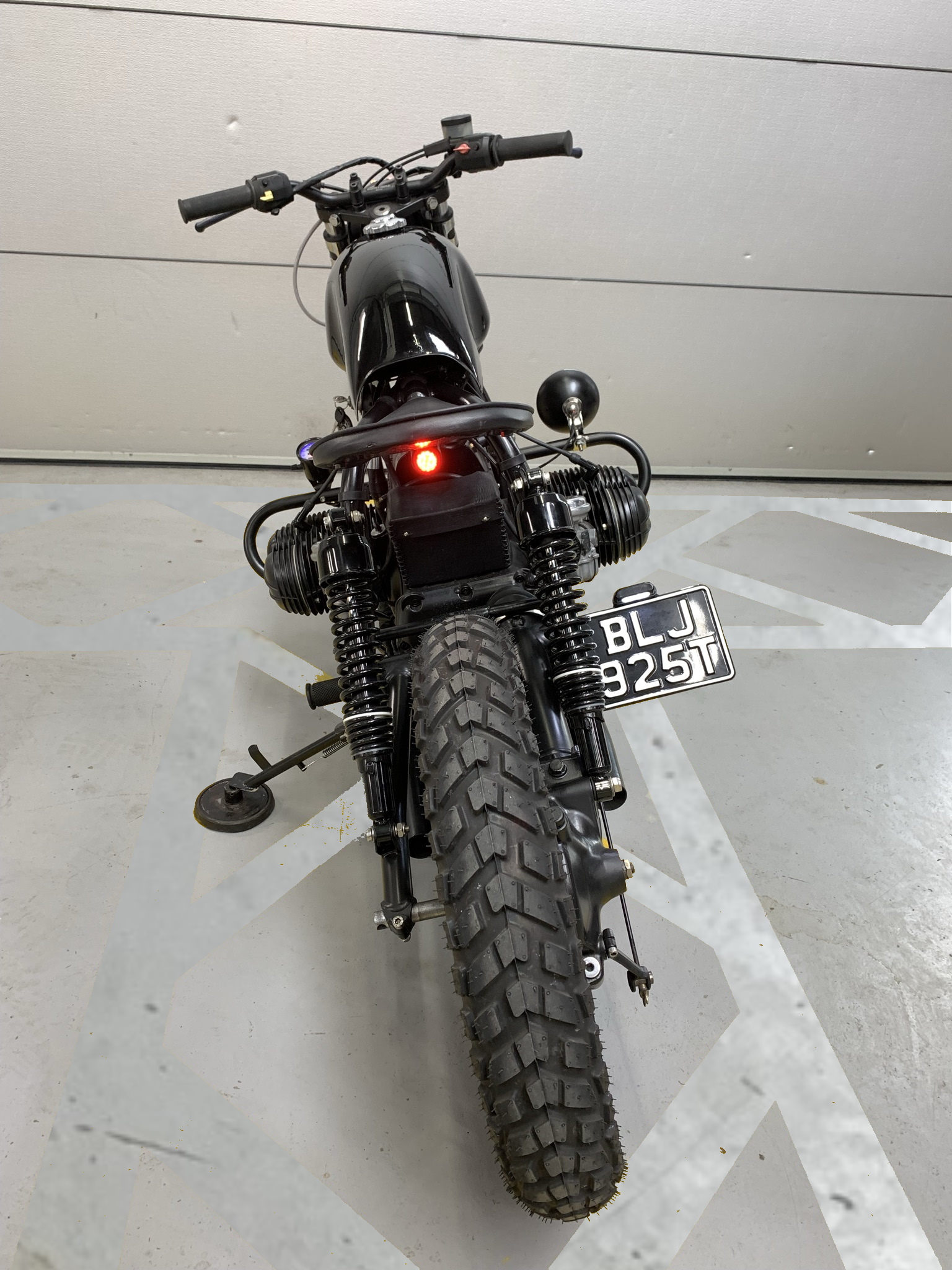 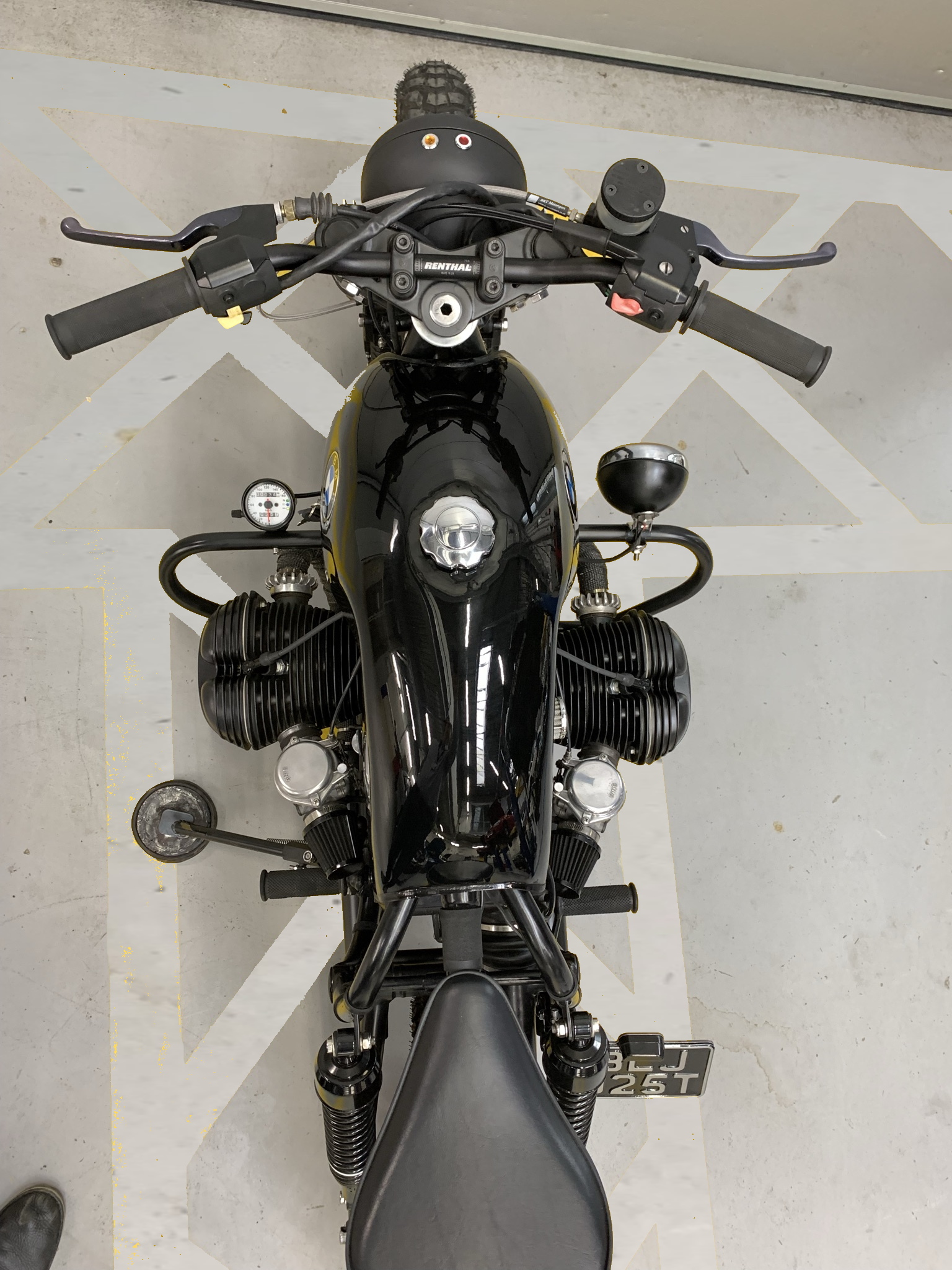 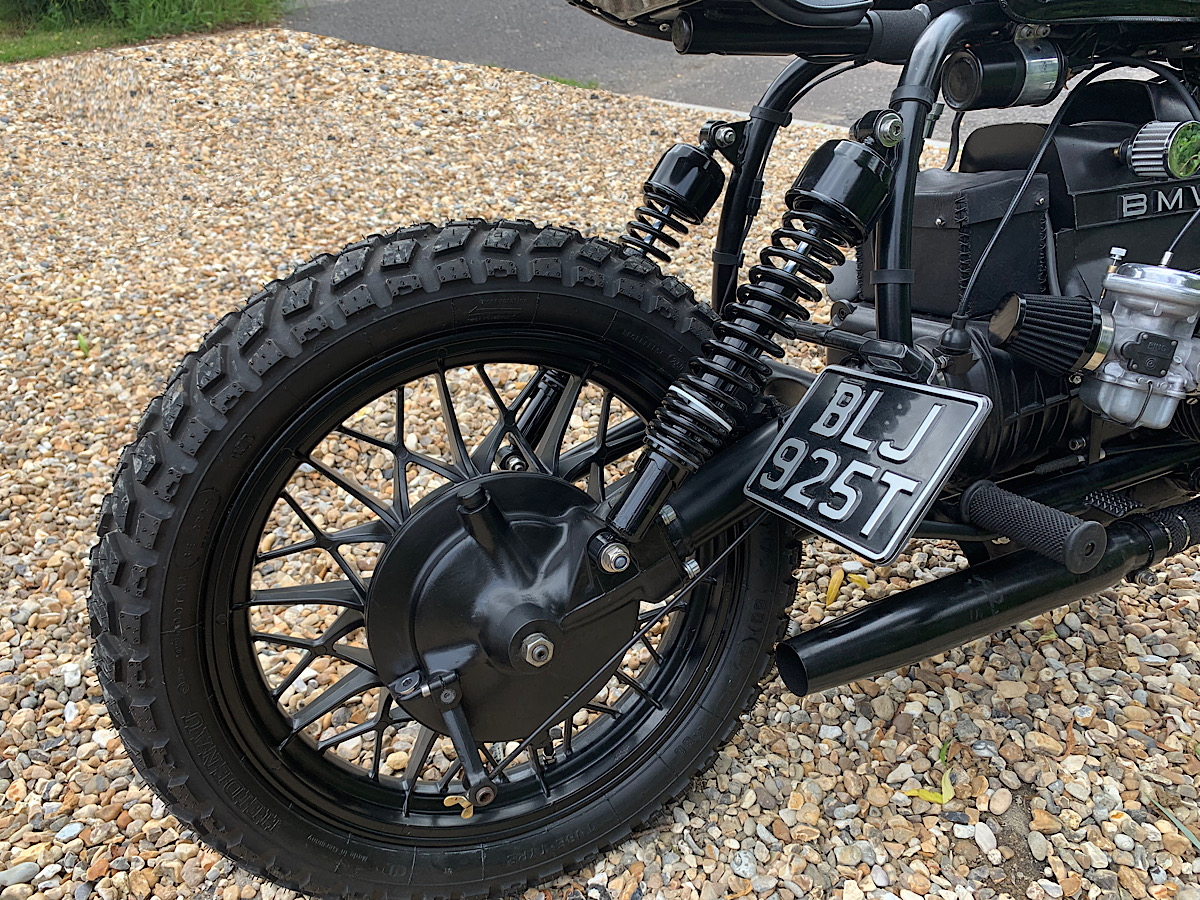 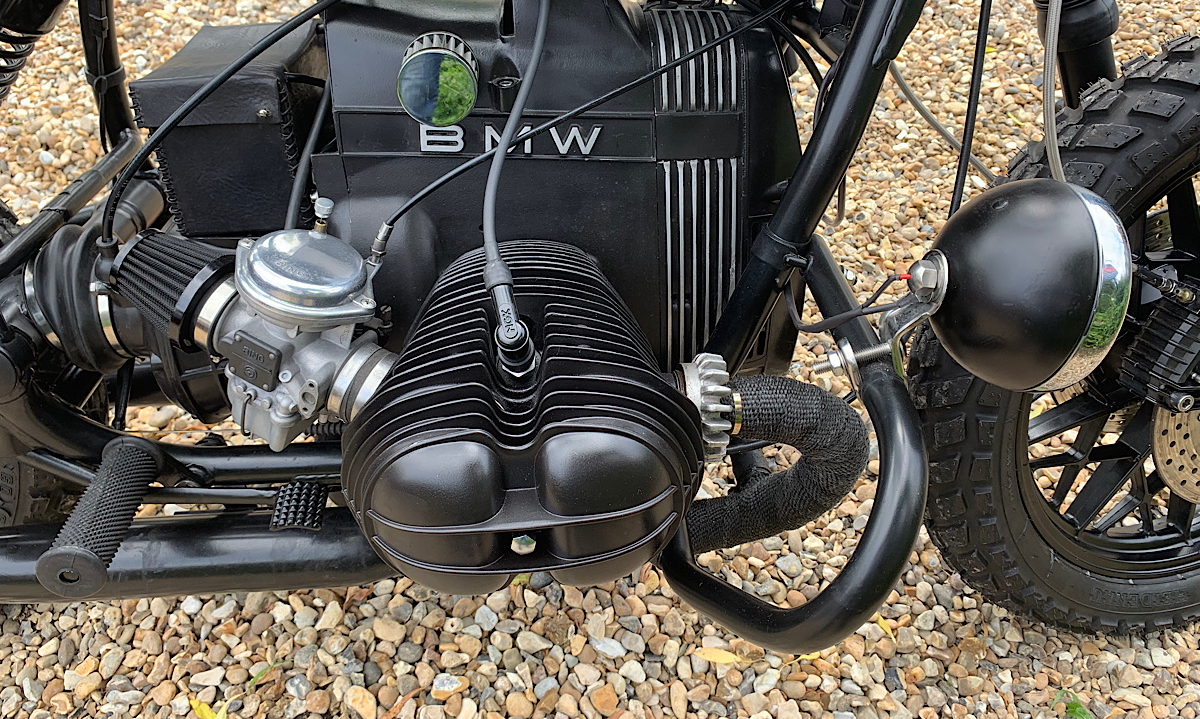 Built over the last 2 years with many hours of labour.  The donor bike was in pretty average condition aesthetically, but had really good mechanicals.  It had been previously rebuilt and has Mahler barrels with really good compression – so this was a perfect donor bike.

The first stage was complete disassembly, and checking of all components. At this stage it was clear that the frame and running gear bearings – wheel, head and swing arm would be replaced.  However the wheels and running gear were all good and went off for powder coating in satin black.  When refitted the wheels were also re-shimmed. The forks were in need of full reconditioning and this was done with new seals and internal bump stops fitted. The std reflectors in the forks were replaced with fabricated polished aluminium BMW plates.  Renthal ultra low profile handlebars complete the front end.

The style was always going to be the classic European bobber look (see French company Irongas) with a small single seat, and the ‘open’ frame look with airbox and battery removed.  So a strong seat post was fabricated into the mainframe tube with very discrete integrated stop/tail.  The original air box had to go and a closing plate fabricated for the starter motor cover. Just behind this a Lithium Ion Battery was fitted into a custom-made leather battery case.

A the front end a trail style yellow headlight was fitted on to chrome industrial looking brackets. This has warning lights for charge and oil pressure. BMW crash bars were added and a genuine 70’s yellow fog light sourced for the right side. On the left side an aftermarket cable drive speedo was fitted.  The main stand was discarded and a surefoot side-stand fitted. Older style original BMW foot-peg rubbers have been used, to replace the later square ones.

Classic satin black bobber exhausts were combined with black exhaust bandage to the down pipes.  I have to say – these are really loud.  Sounds fantastic, but if you have sensitive neighbours they will certainly notice!  New Heidenau trail tyres (and tubes) really set off the look, and are quite nice on the road. I fitted full knobblies to a previous project – they looked great but were horrible to ride on.

The engine and gearbox have been finished in satin black. Whilst the engine was out a new clutch was fitted and crankshaft, gearbox input, and oil pump seals all replaced.  To finish off the look for the engine, new peanut rocker covers were added, with new HT leads and black NGK caps.  The carbs were re-conditioned with new seals, and re-jetted for the new air filters. Also needles and float valves replaced.

Before going off for powder coating new brackets were fabricated for that 70’s ‘lay down’ shock look, and new 400mm shocks sourced.  A bracket was also added to the side of the frame for the ignition switch (which is original). All the original warning and tell-tale lights have been re-commissioned, with high beam and neutral in the speedo, and charge and oil pressure in the headlight. Braided silver brake hoses were used for the twin Brembo discs.

I really wanted to accentuate the ratio of narrow at the top, wide at the cylinders – so sourced a café racer style gloss black tank.  This has had the mounting bracket from the original tank fabricated in – so is a really good fit.  The look is amazing – see the top view photo – and knees tuck in really well for that retro riding stance.  Finally all fasteners have been replaced with polished stainless steel items.

The end result looks fantastic, and is a hoot to ride.  The short stroke R65 engine is really responsive – and it feels and sounds amazing to ride.  Unfortunately I am moving and losing my garage/workshop until I can build a new one.  So this beautiful creation has to go.  The asking price of £7,500 is very reasonable for a custom bike of this quality.