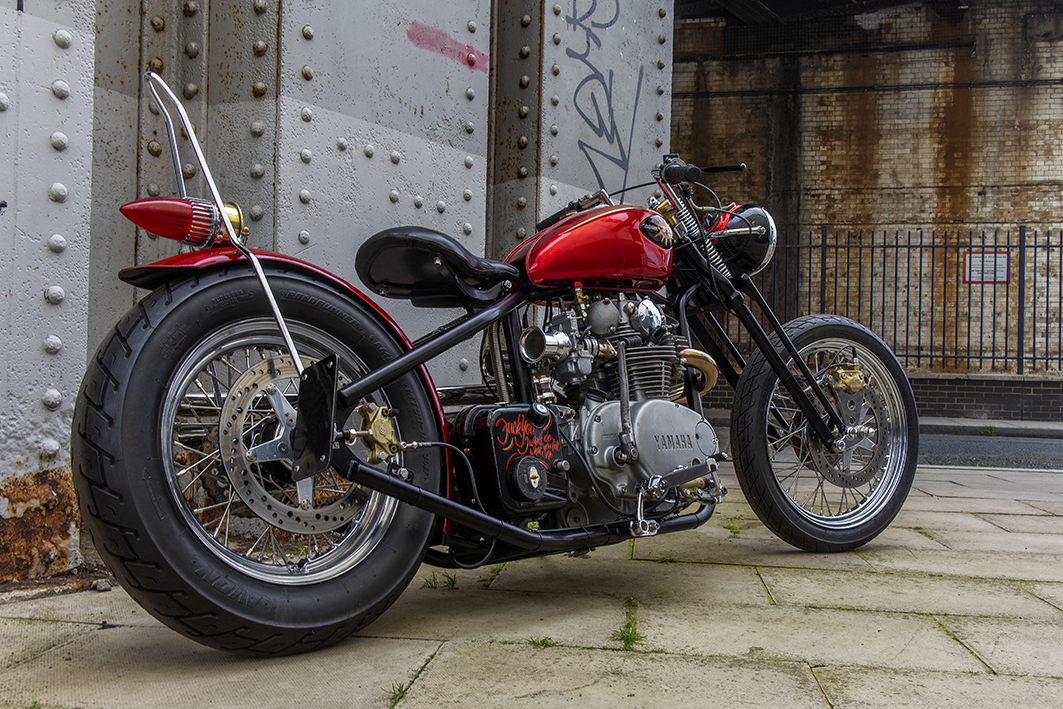 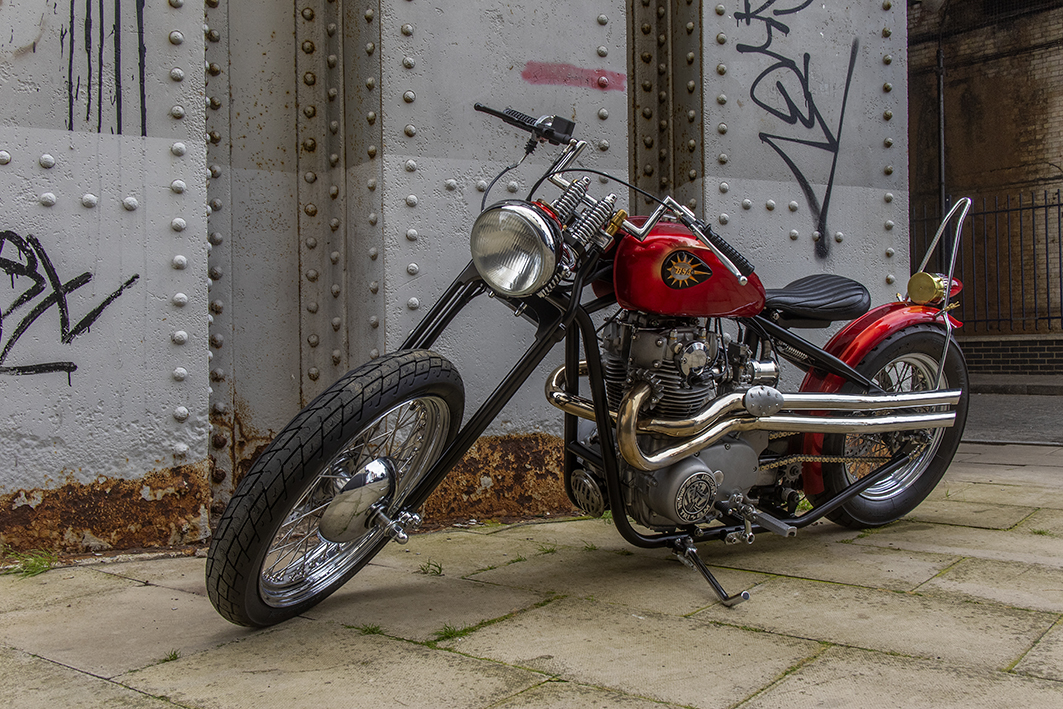 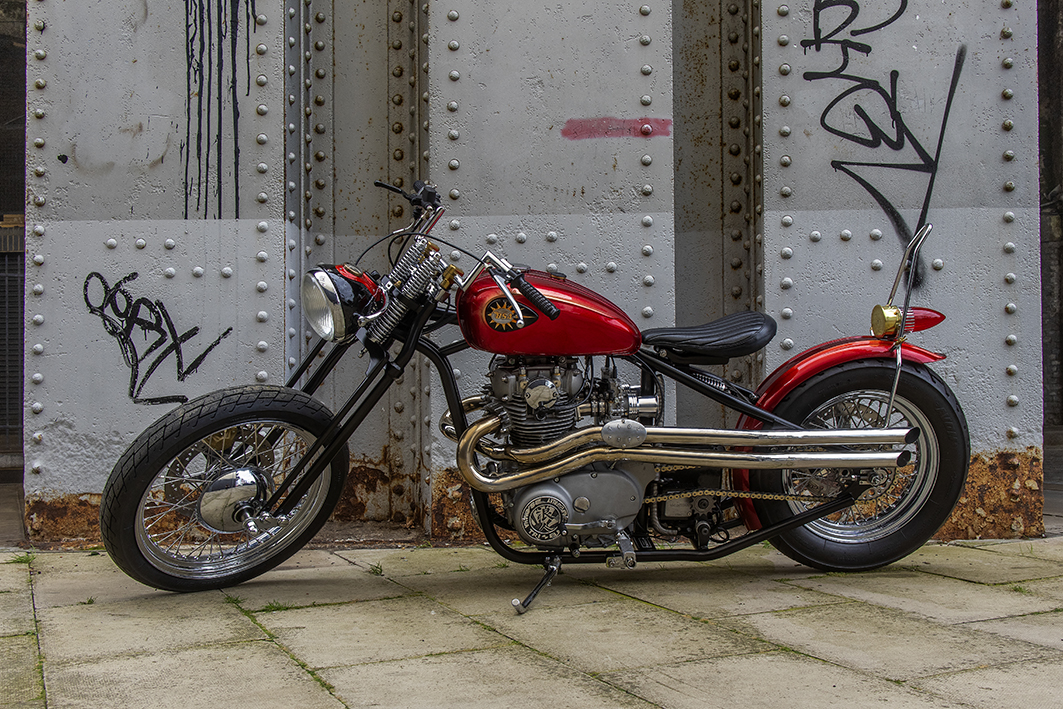 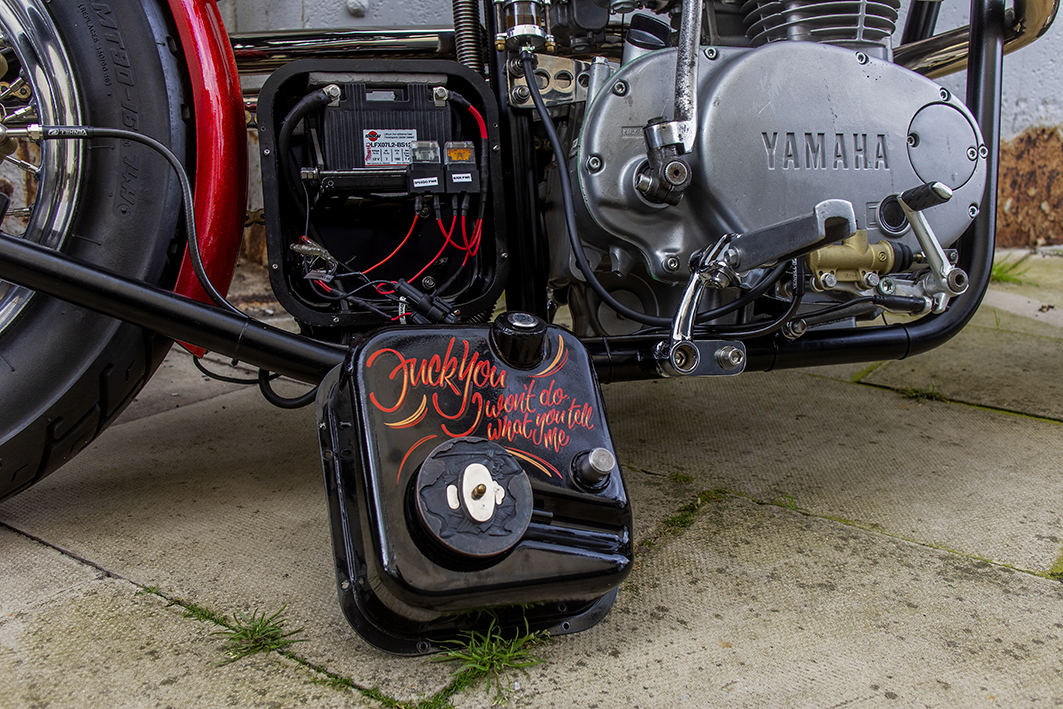 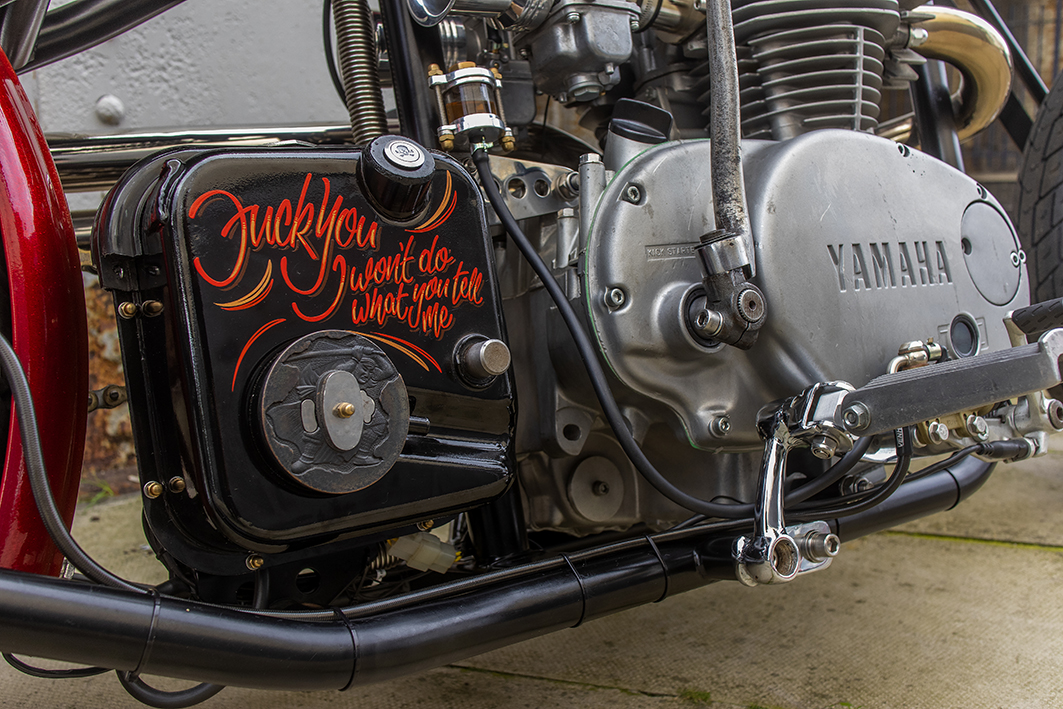 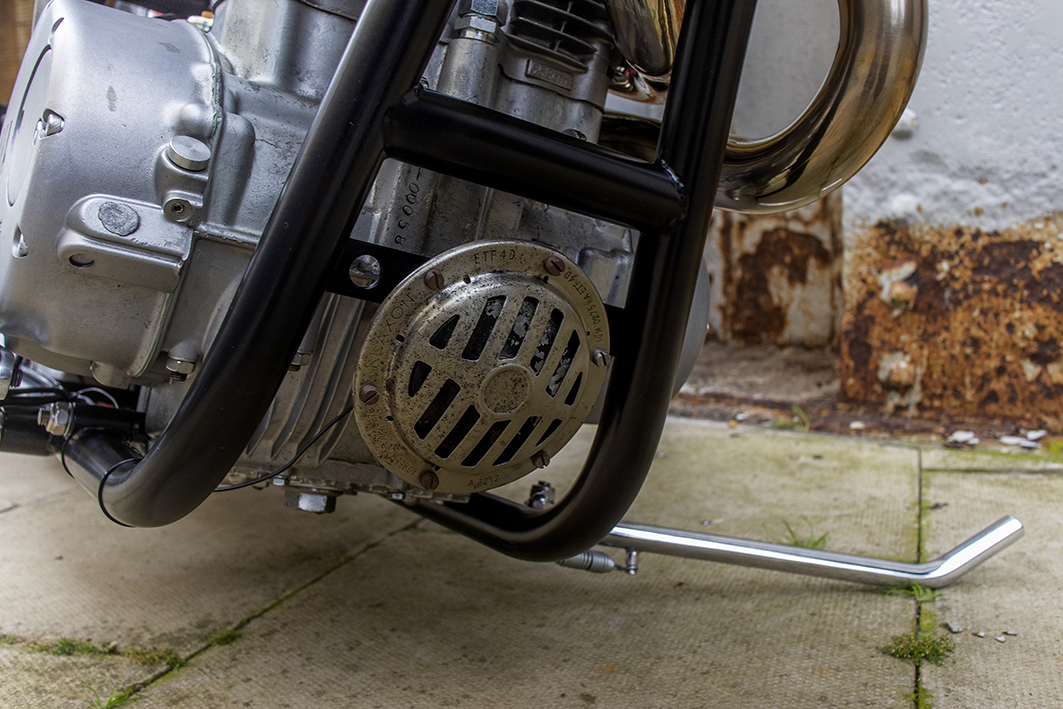 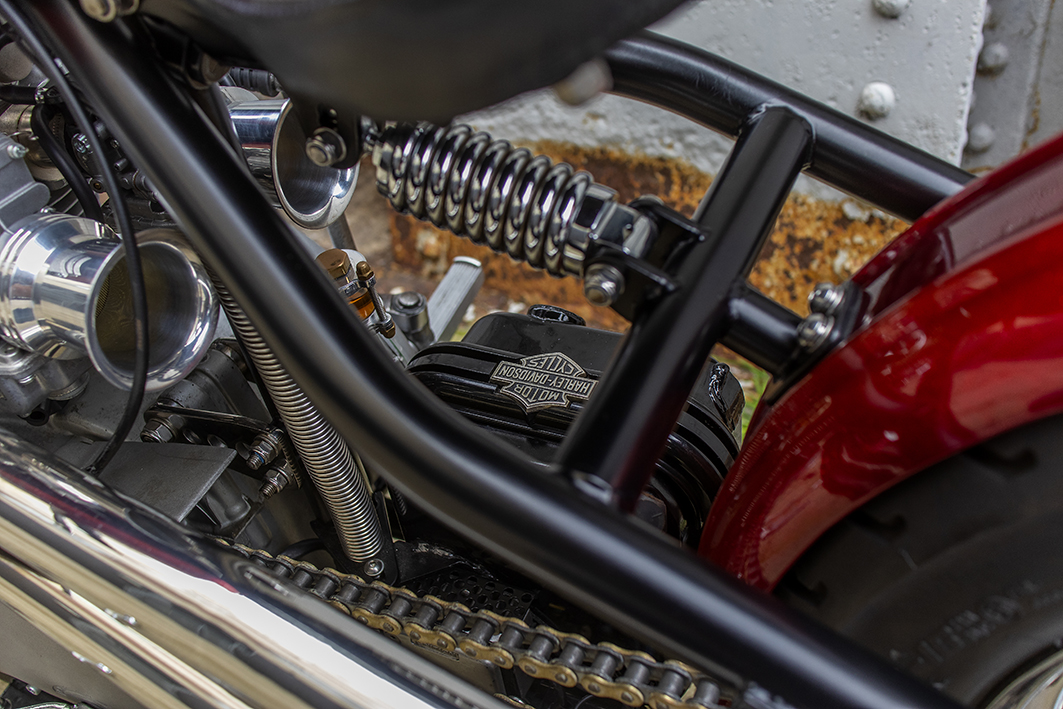 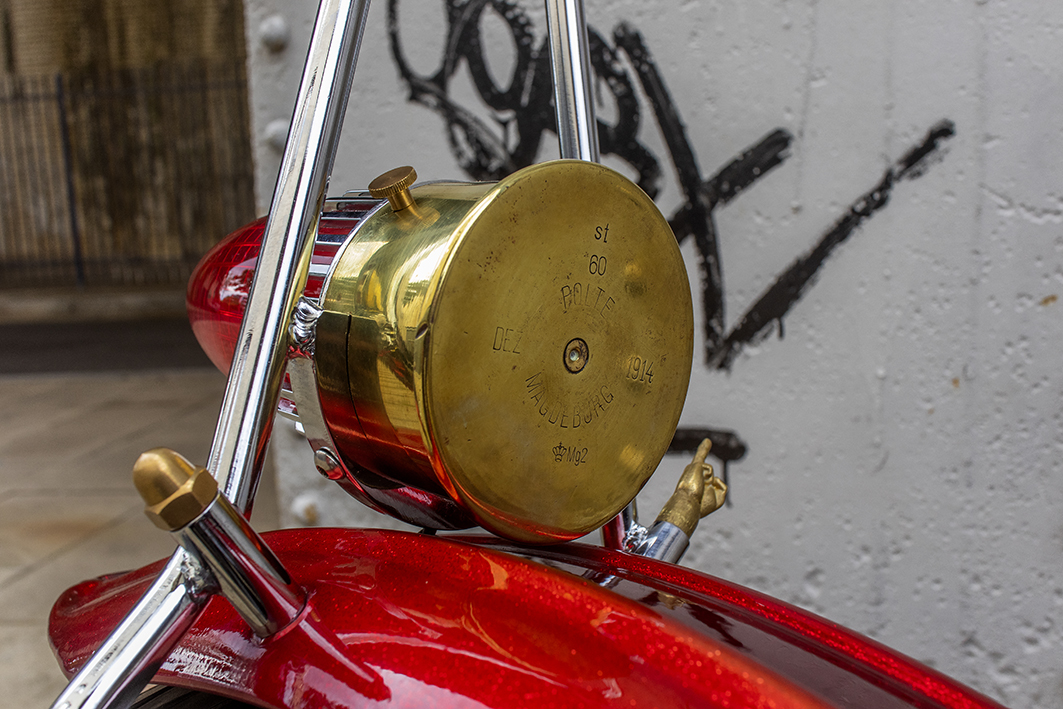 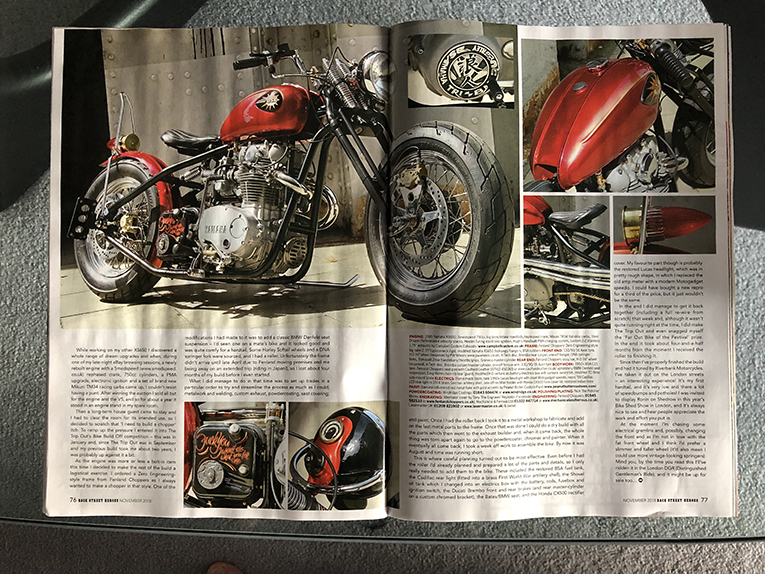 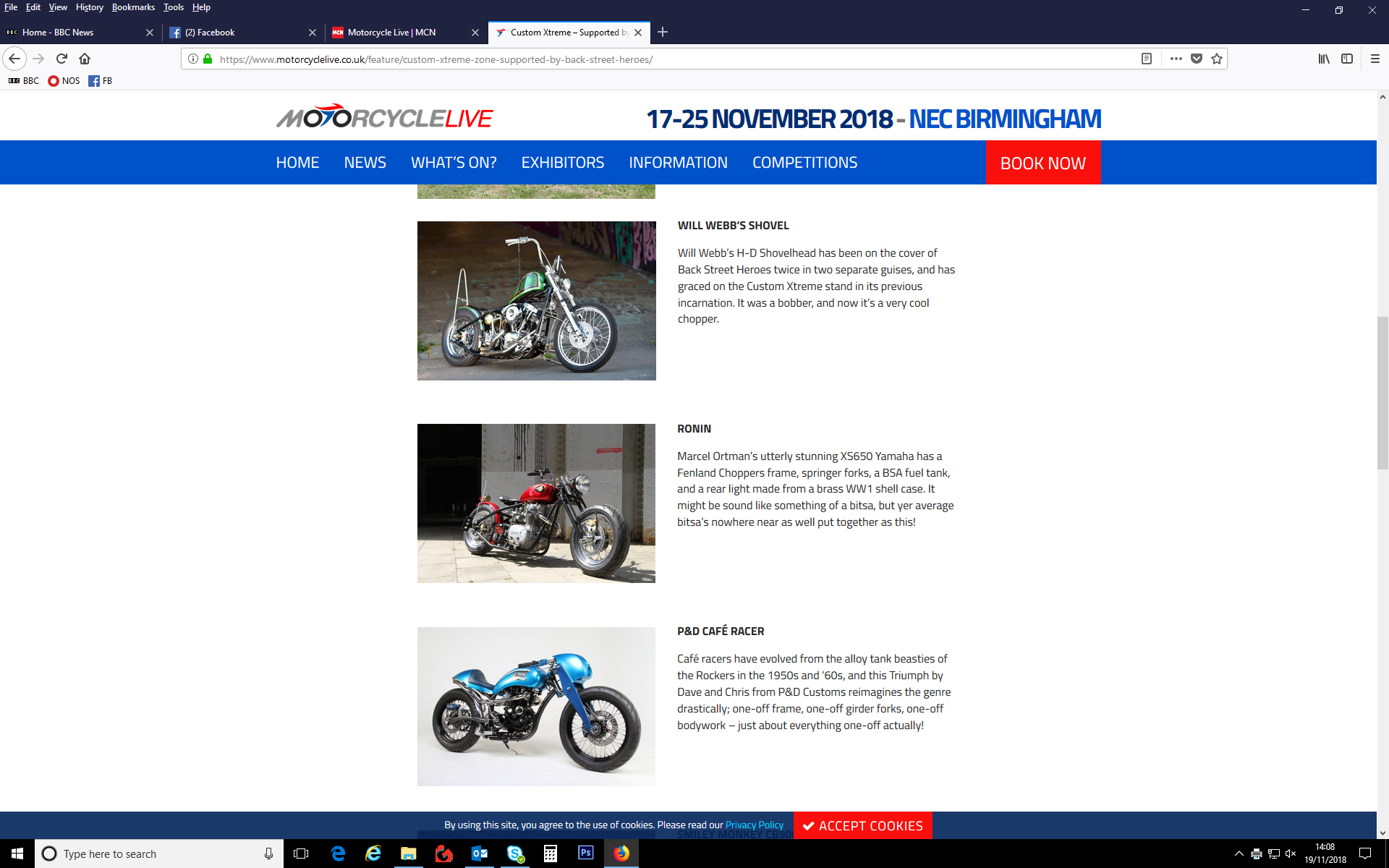 I will respond to any enquiry, so if you have not had a reply, please check your junkmail. I have one person email me twice and replied both times, but I think these may have gone into junkmail. So please check.

Named after a Samurai without a master for all the different manufacturers represented in this motorcycle.

This bike was built around a Howard Smedley upgraded and 277 degrees rephased and increased capacity to 750cc Yamaha XS650 engine. If you are familiar with XS650s, you will know that name and know the engine has been lavished with attention (see more details below).

According to engine number (frame long gone) this was originally an 80/81 SH from Canada. Probably imported and first registered in 85 in the UK.

This bike does also come with some pedigree:

-        Was invited amongst 15 other bikes to the Back Street Heroes stand at the NEC Motorcycle Live event in 2018;

Since these events some more upgrades were made to the bike including swapping the 16” front wheel for a 19” with new rubber, grafting vintage Harley pegs onto the original modified Yamaha footpeg hangers, creating a custom brass tank bung for better tank mounting, upgrading the ignition coils to under tank Dynatek coils and doing some general electrics upgrades.

And here is a video link:

I was going to do a proper slick video but ran out of time, so just a basic video of the bike running.

But let’s go into some detail about what could be yours:

As said, rephased and upgraded to 750cc by Howard Smedley and naturally aspirated by a set of new Mikuni TM34s (rejetted from stock) with Steel Dragon Performance Velocity Stacks, a Heiden tuning ignition and a handmade custom stainless steel exhaust. Making it sound mean and loud! And kickstart only, for the real hardcore amongst us!

Powdercoated Fenland Big Tube Goose neck frame with some custom touches like the tank connection and the classic BMW Denfeld seat suspension brackets. So it won’t be as bumpy a ride as other hardtails! Original late 50s, fully restored and lined BSA C15 tank, Easy Riders twin ribbed rear mudguard topped with a chrome sissybar which holds a LED Cadillac bullet light finished with a genuine 1914 brass artillery shell. The seat is wrapped in distressed leather Bates style and the headlight is a fully refurbished late 50s Lucas SSU 700/P1 with underslung parking light used on many early British bikes. The amp meter has been replaced by a Motogadget MST Vintage speedo and the lights are operated by the original bakelite switch. A late 70s Harley Davidson Shovelhead oiltank was repurposed into a leccy box, holding a Shorai Lithium battery, the fusebox and the start and kill switch! No fancy key things here! Front fork is a 2 under DNA Springer with custom brass risers holding Tomaselli Z-bars bars with a Tomaselli Speed throttle.

The rear wheel is also from Harley Davidson Softail Heritage, this time 16”. Again freshly laced with stainless steel spokes and shod in new Avon rubber (matching Roadrunner AM21). A custom rear sprocket delivers the engine’s power to the rear wheel on one side and the other side has a matching Kustom Tech Star floating brake rotor. A side mounted licence plate holder completes the chopper look.

The brake systems were lifted of a Ducati Monster. The Brembo rear brake calliper is operated by the Brembo brake master cylinder from said Monster, grafted onto the original Yamaha XS650 footrest hanger. Brake fluid is held by a remote brass and glass LC Fabrications resrervoir, mounted under the seat. The front brake is operated by a Kustom Tech Grimeca master cylinder. All hoses braided for extra power.

The paint is representing the red and gold colours out Japanese architecture and art, laid on with flakes (because it’s a chopper!) by Jack from Peanutbutter Customs.

Custom engraving by Tony ‘the engraver’ Reynolds on the side of the engine, giving the bike its name in Japanese and highlighting the bits that are in it!

If you’ve come this far you are obviously interested and can see that this bike has many special features and custom parts! So, get in touch and lets see if you can become the new owner!