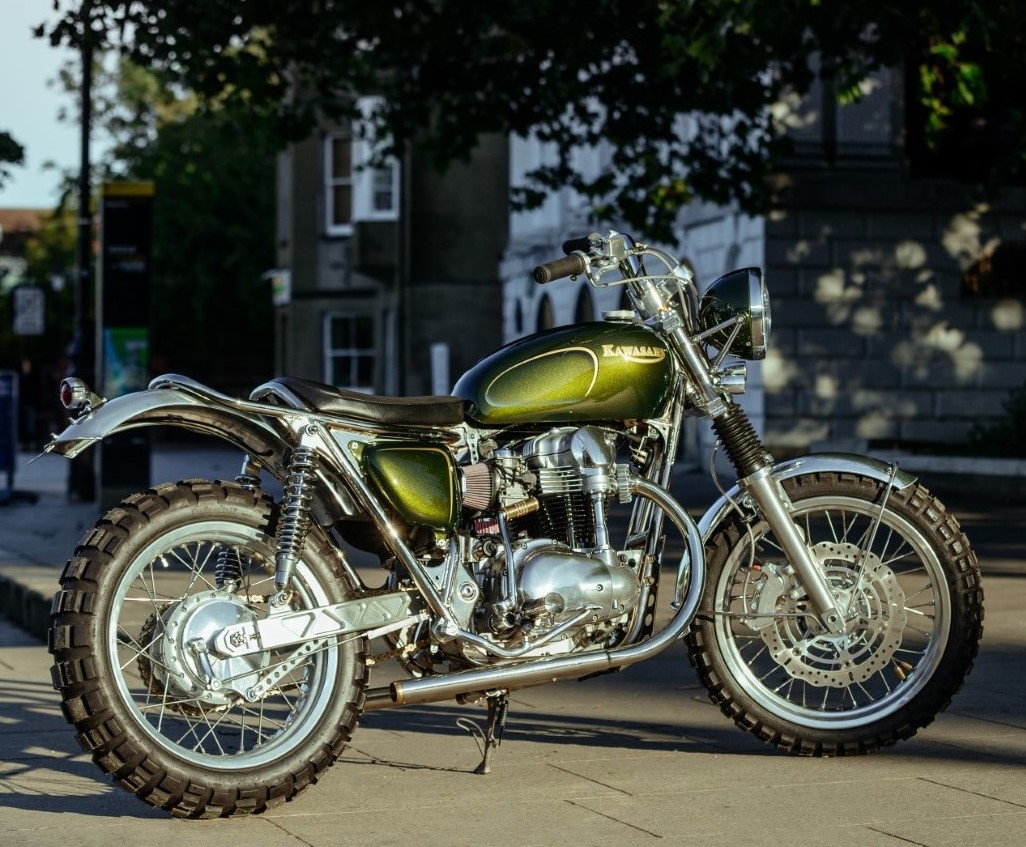 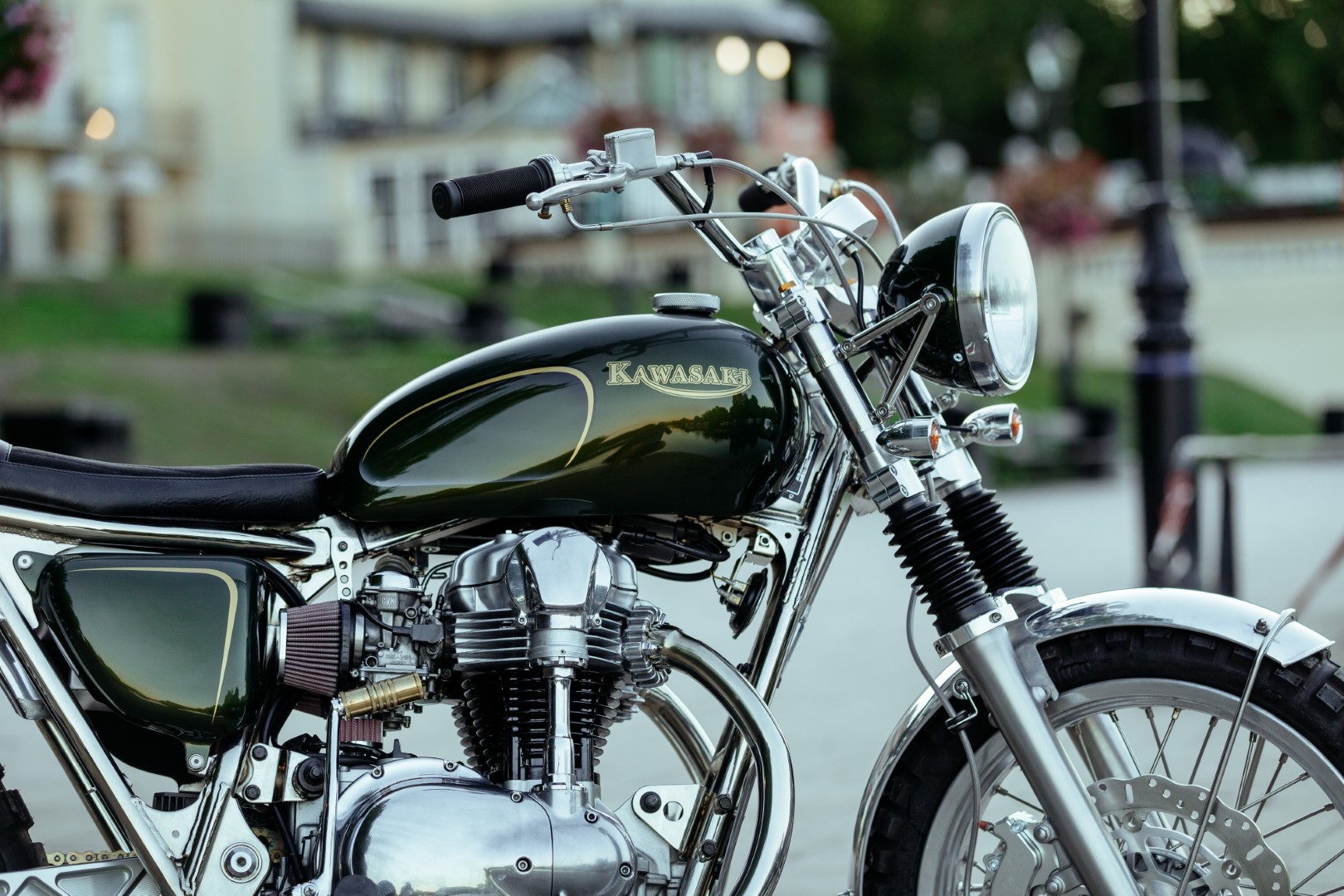 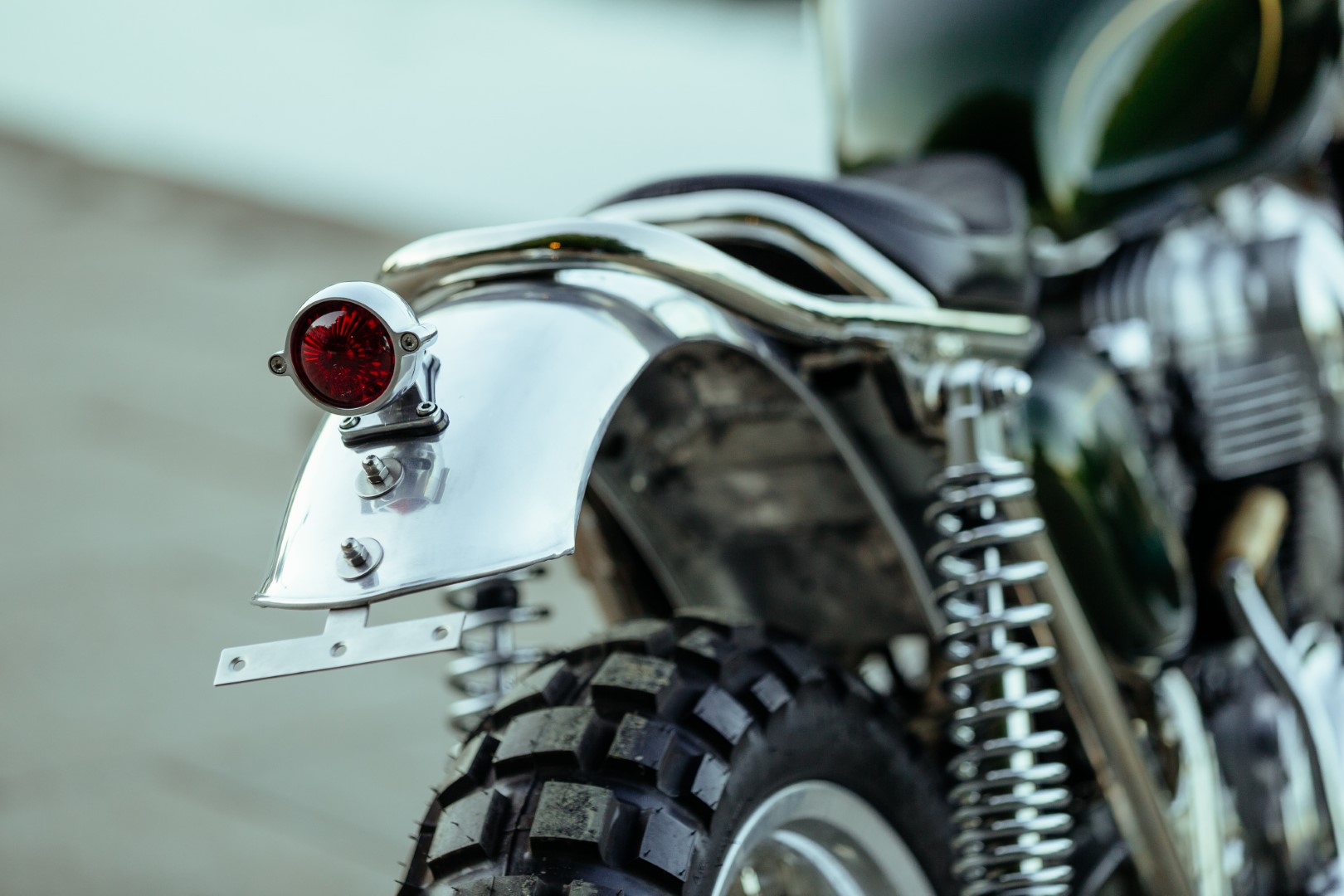 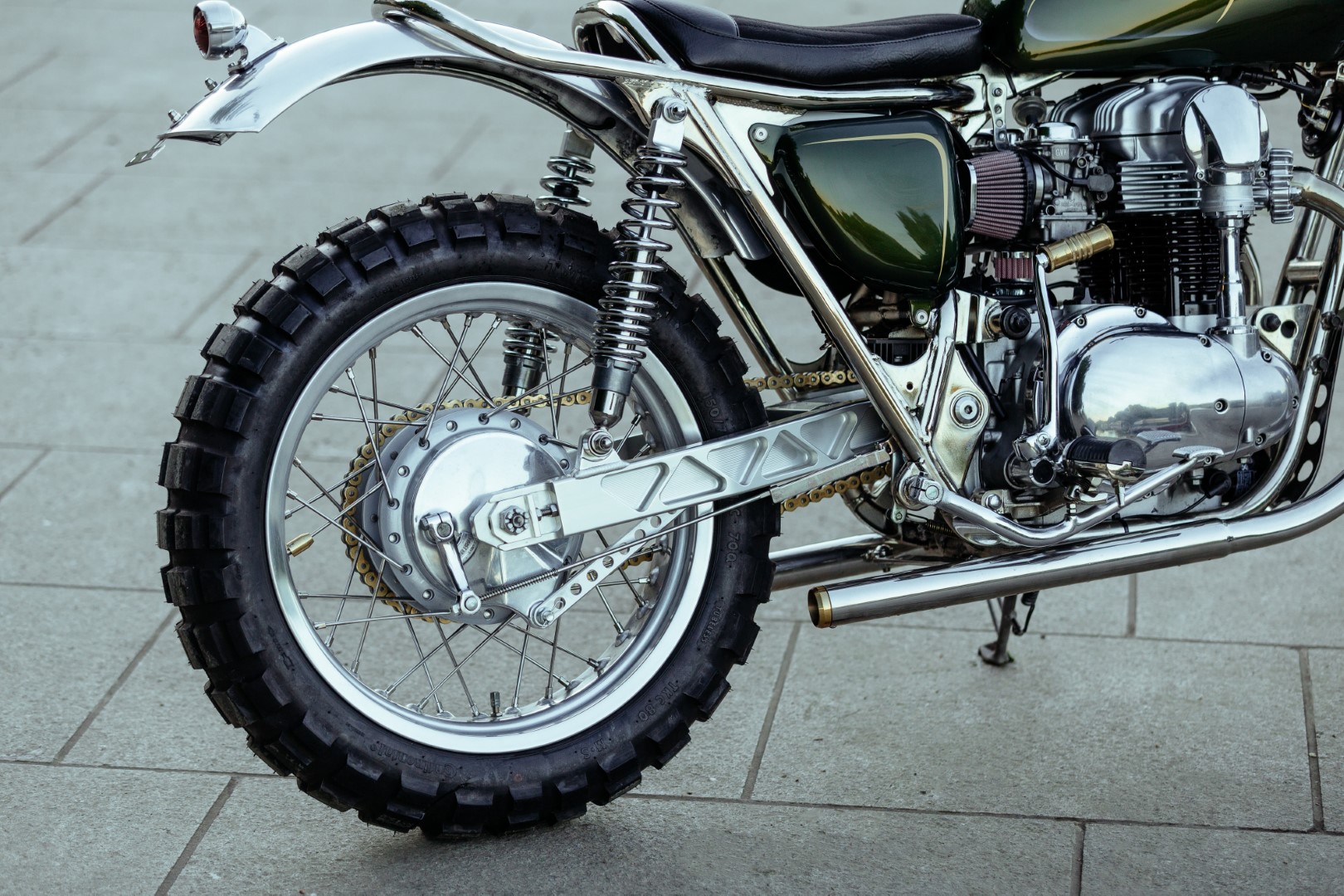 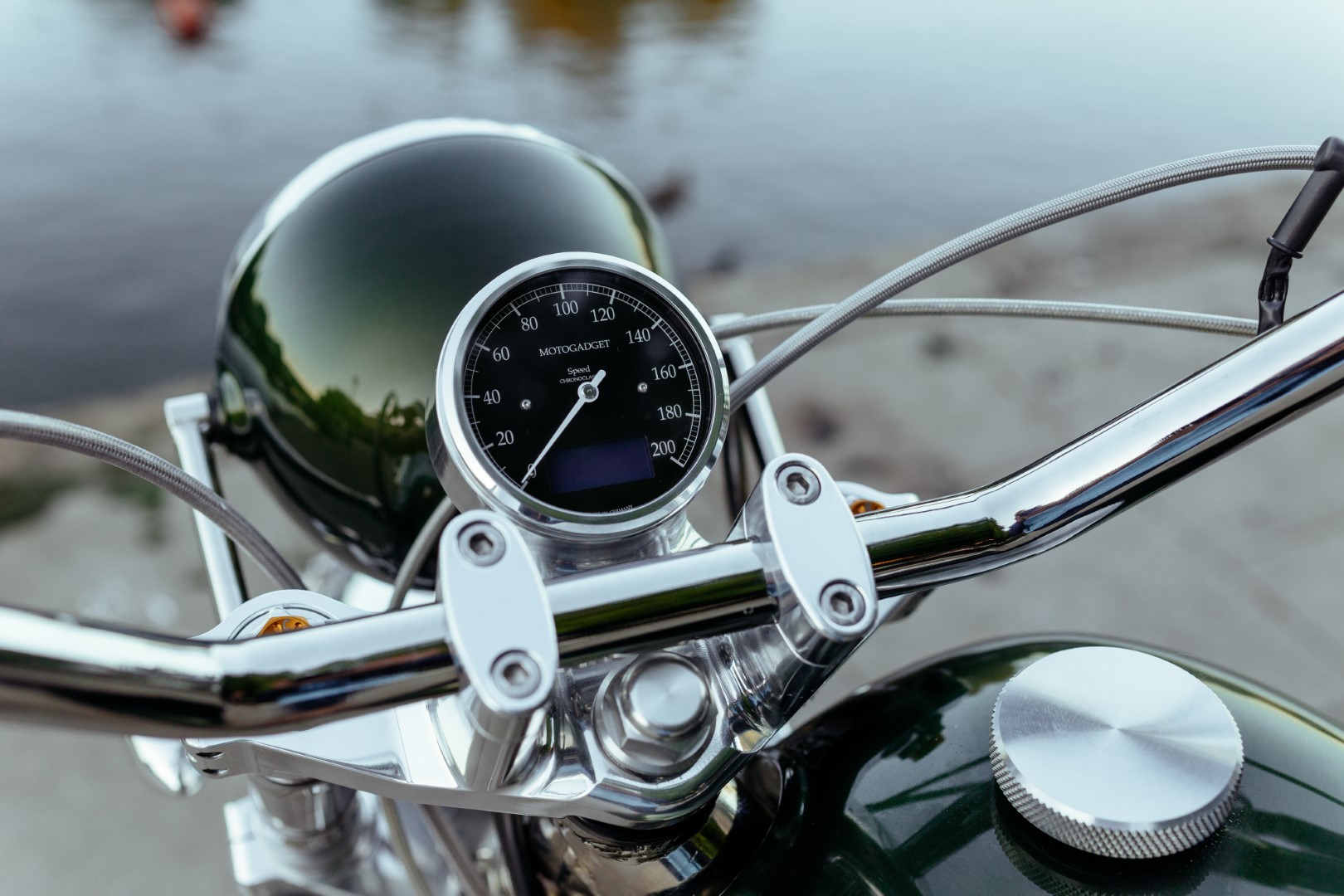 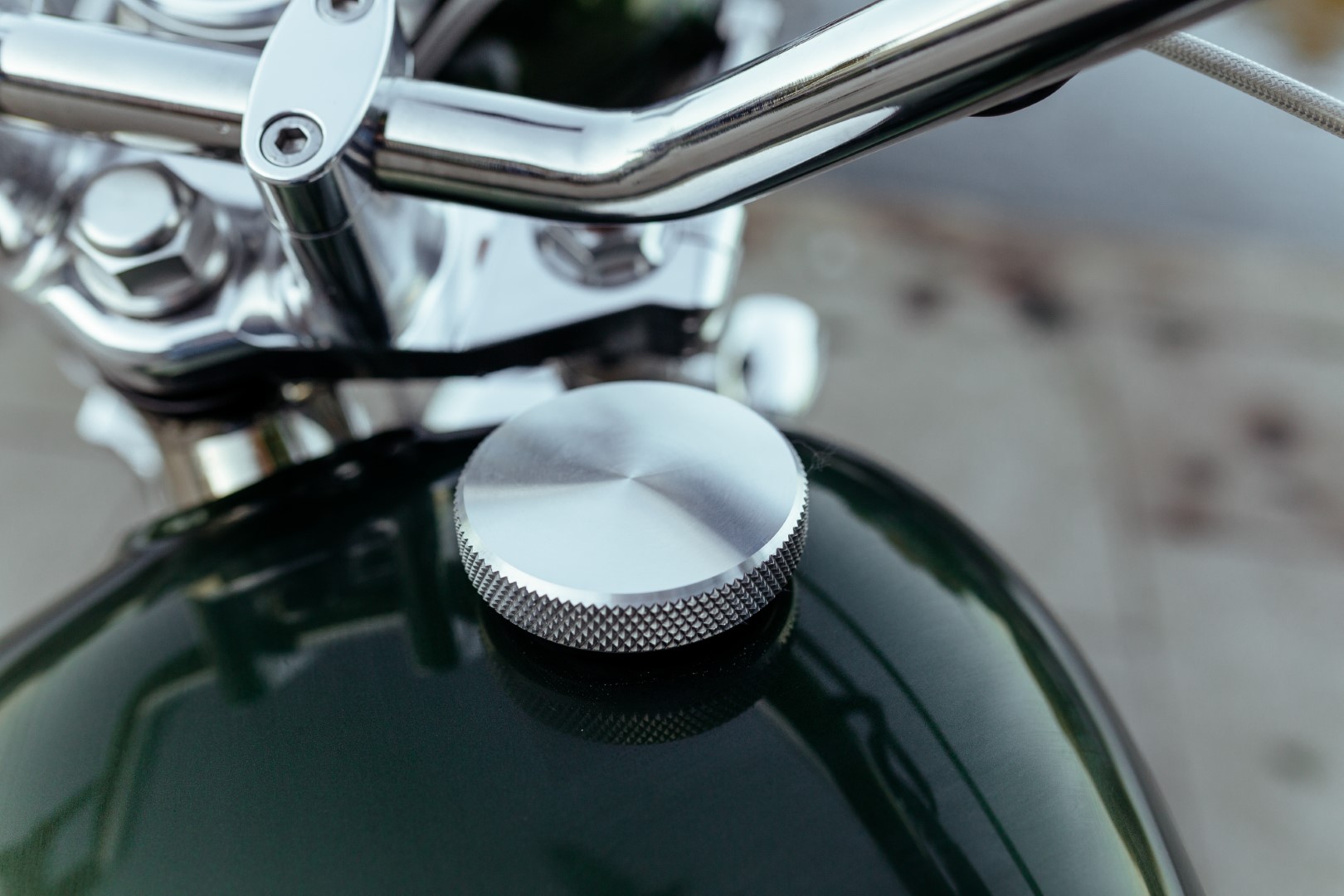 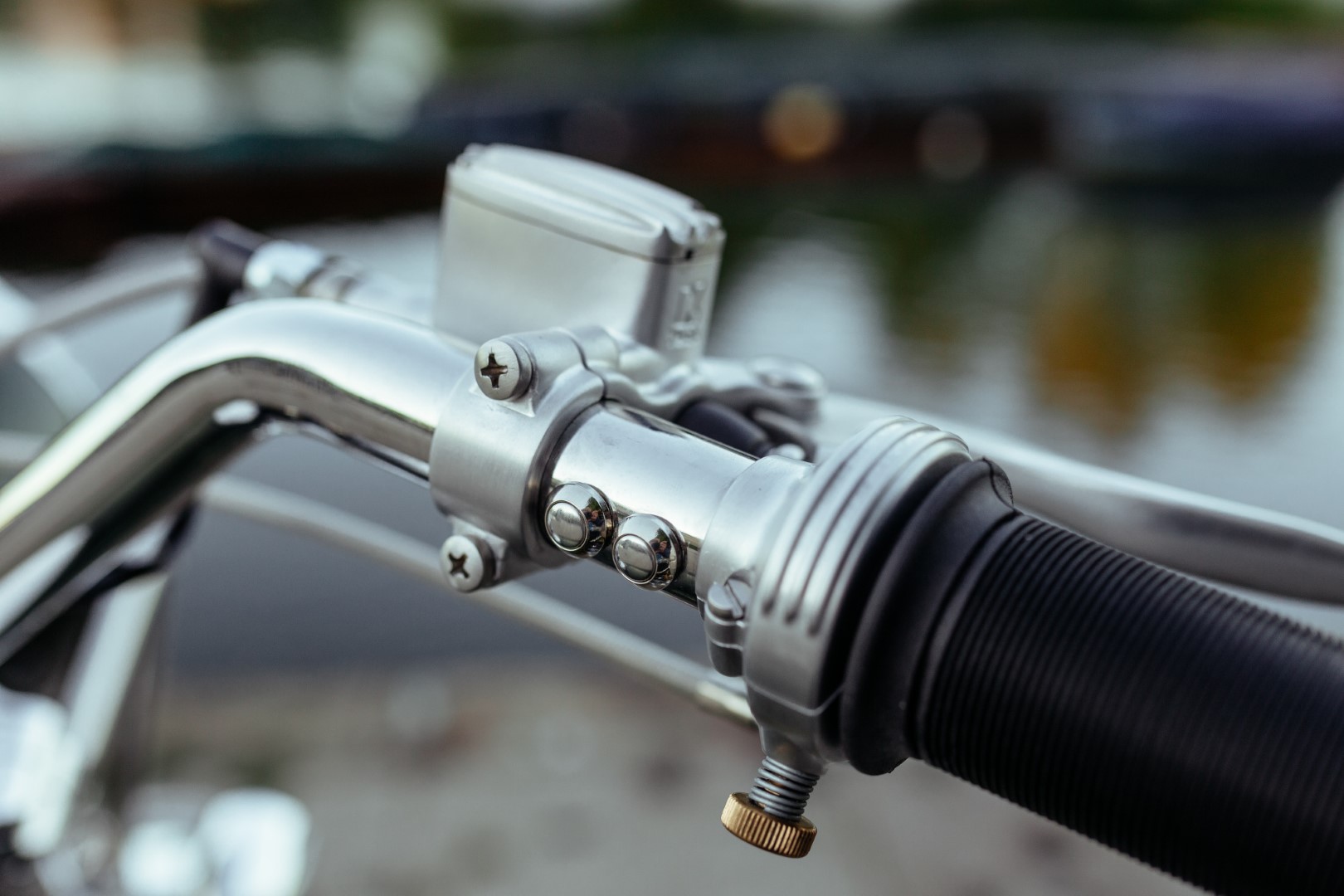 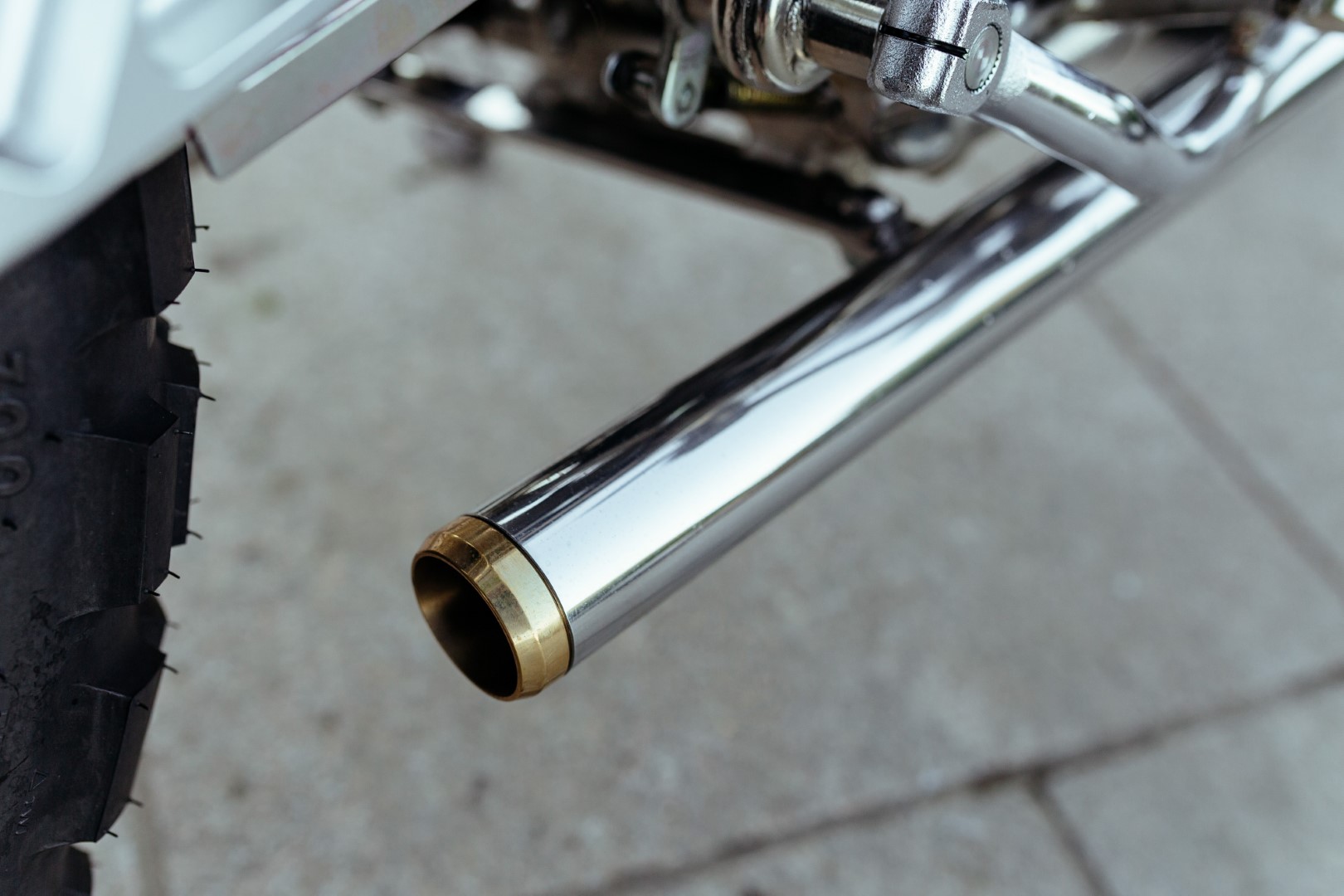 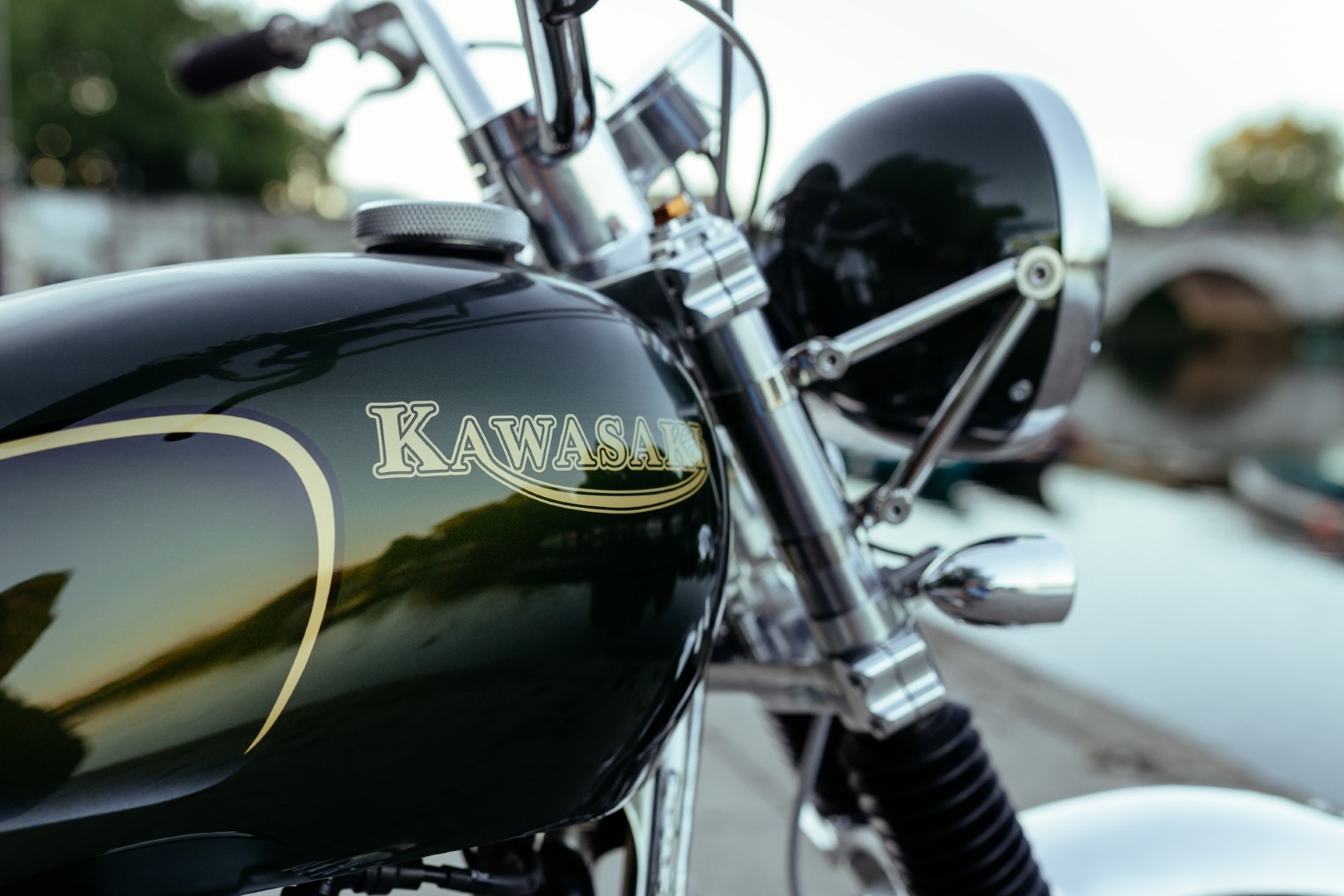 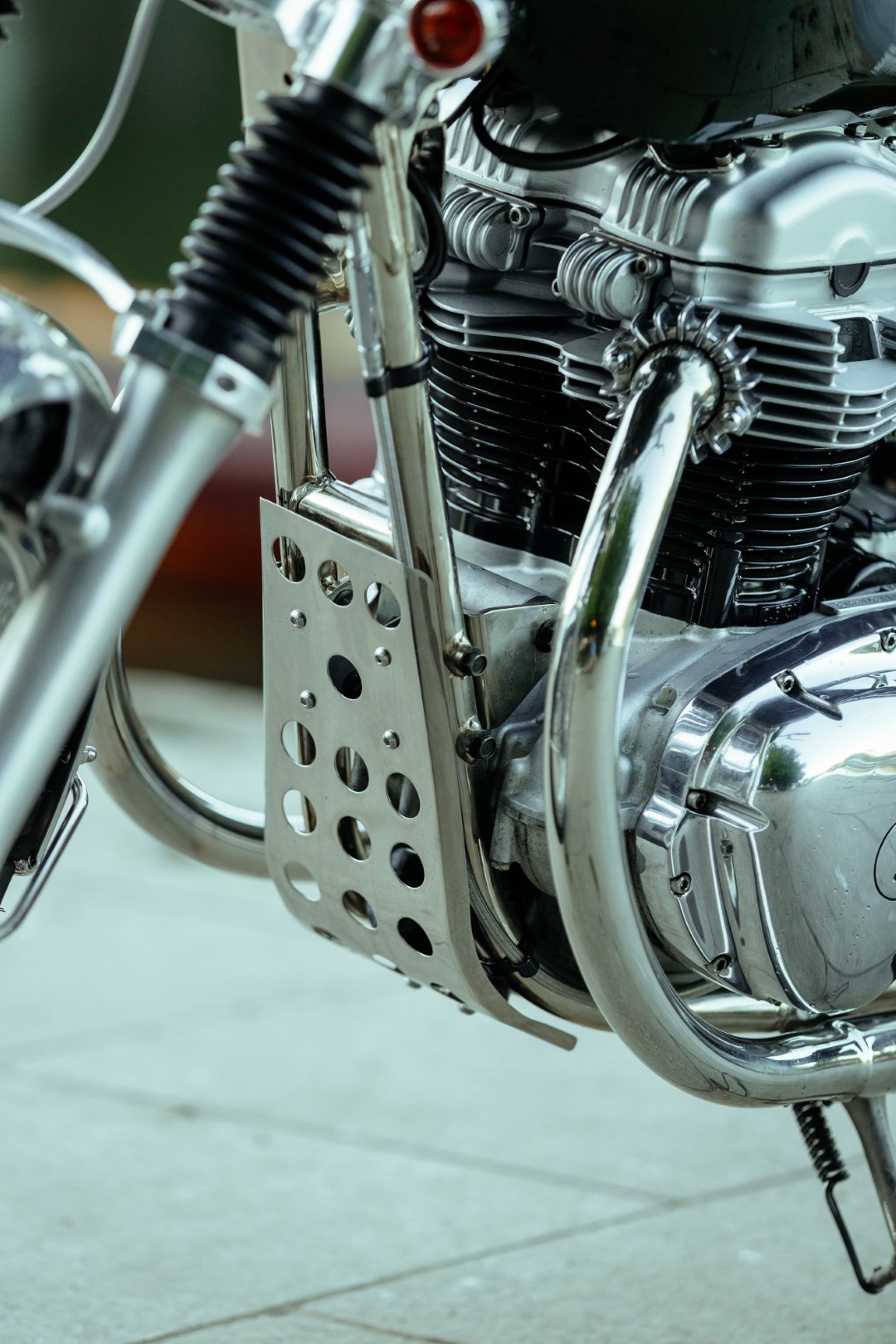 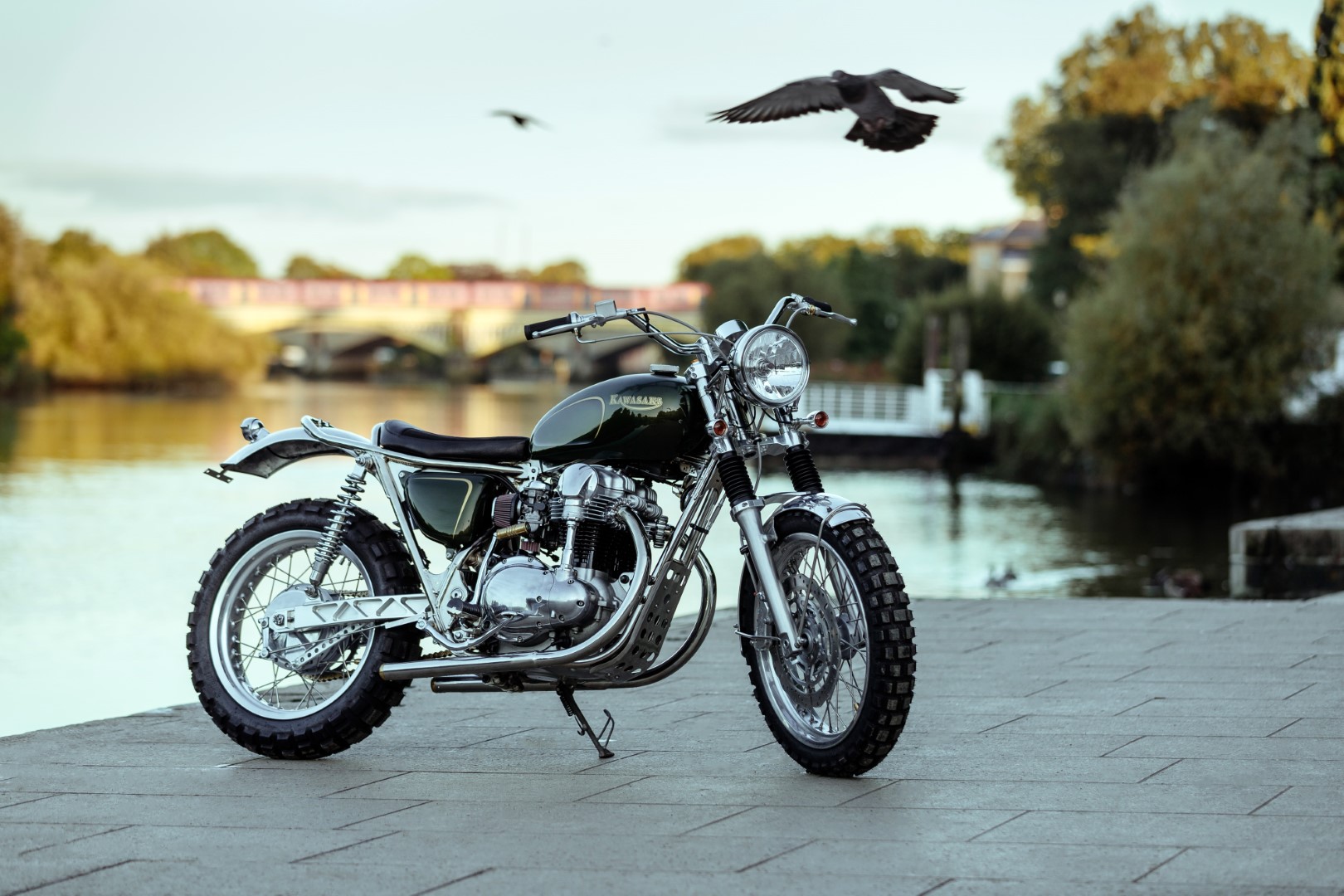 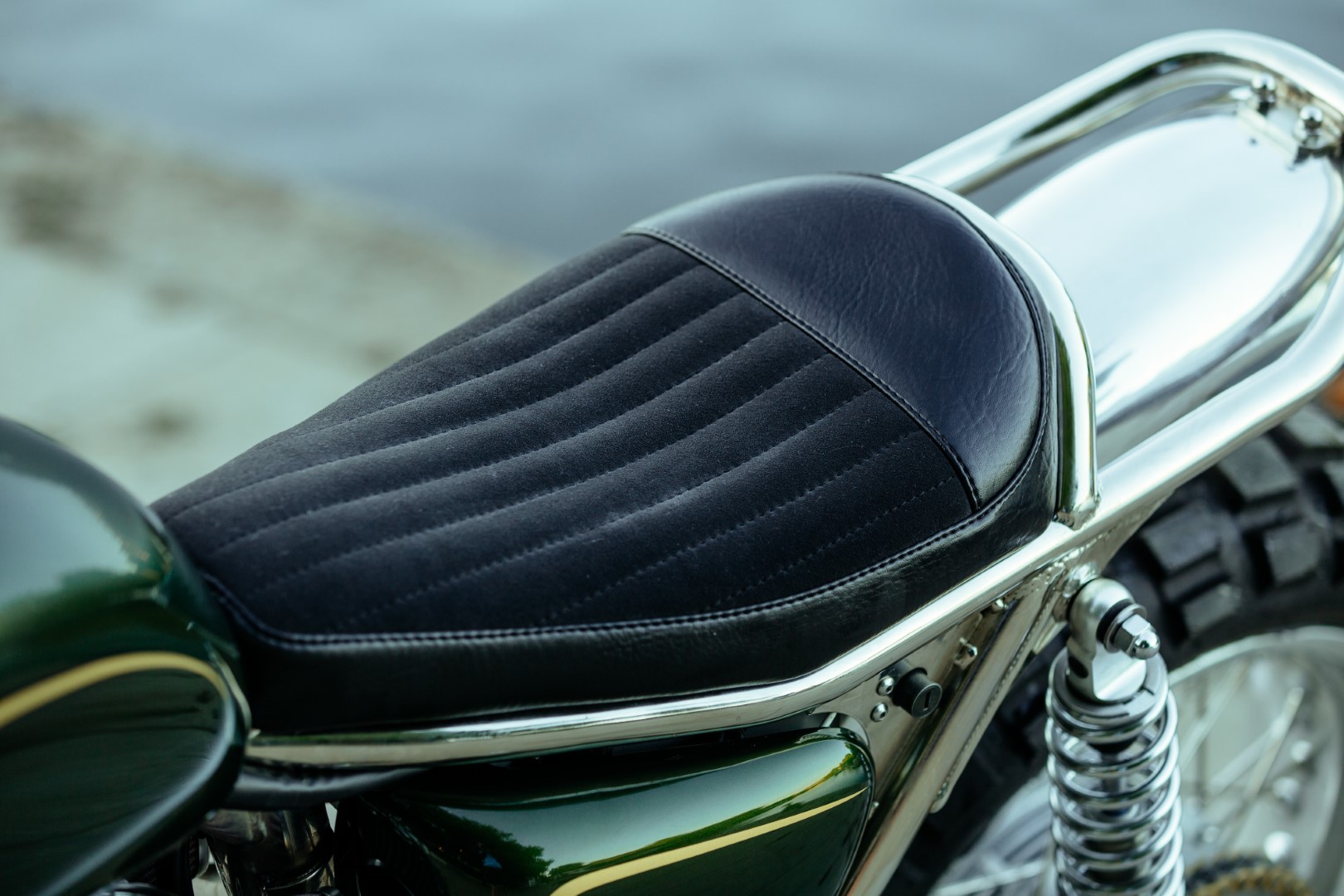 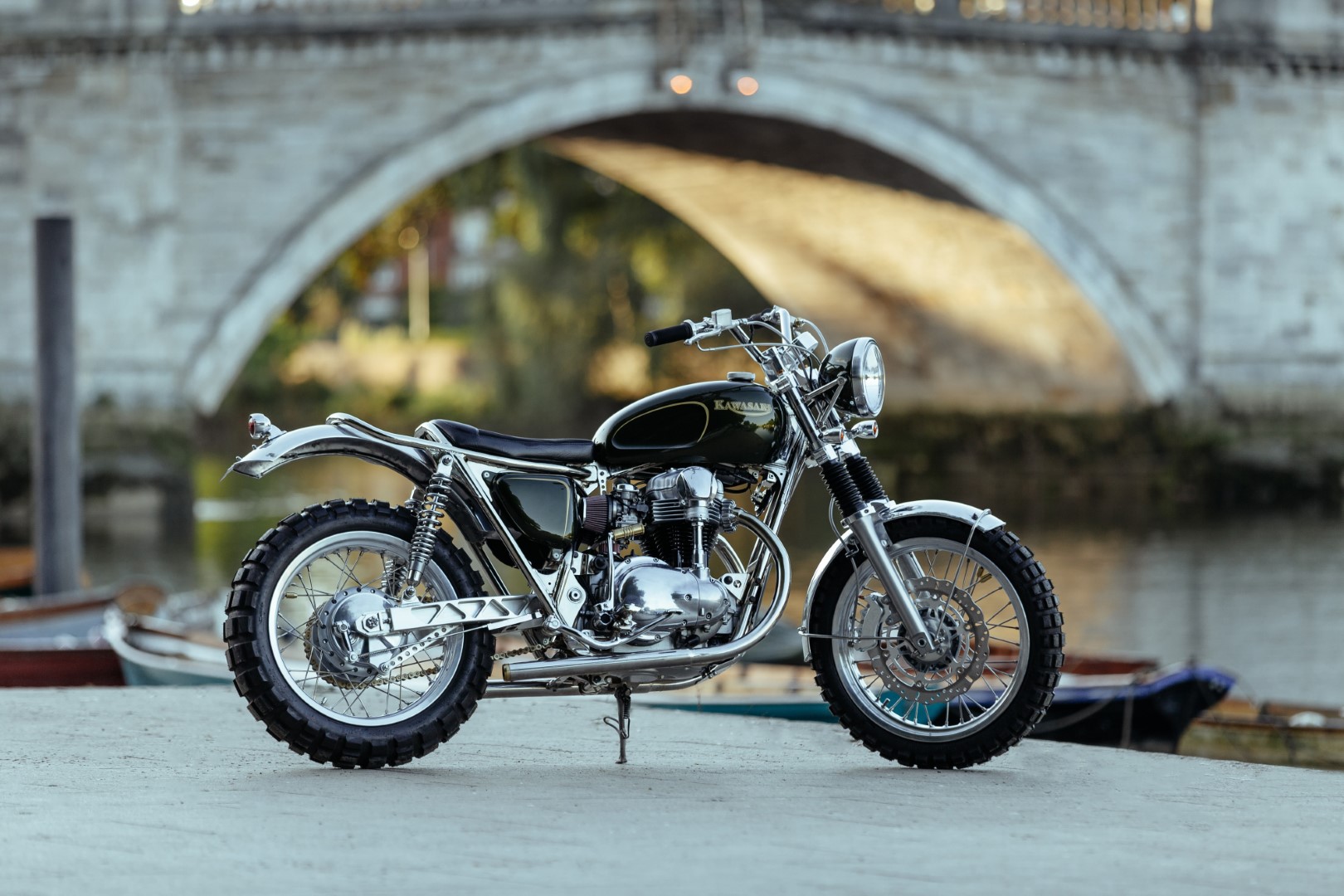 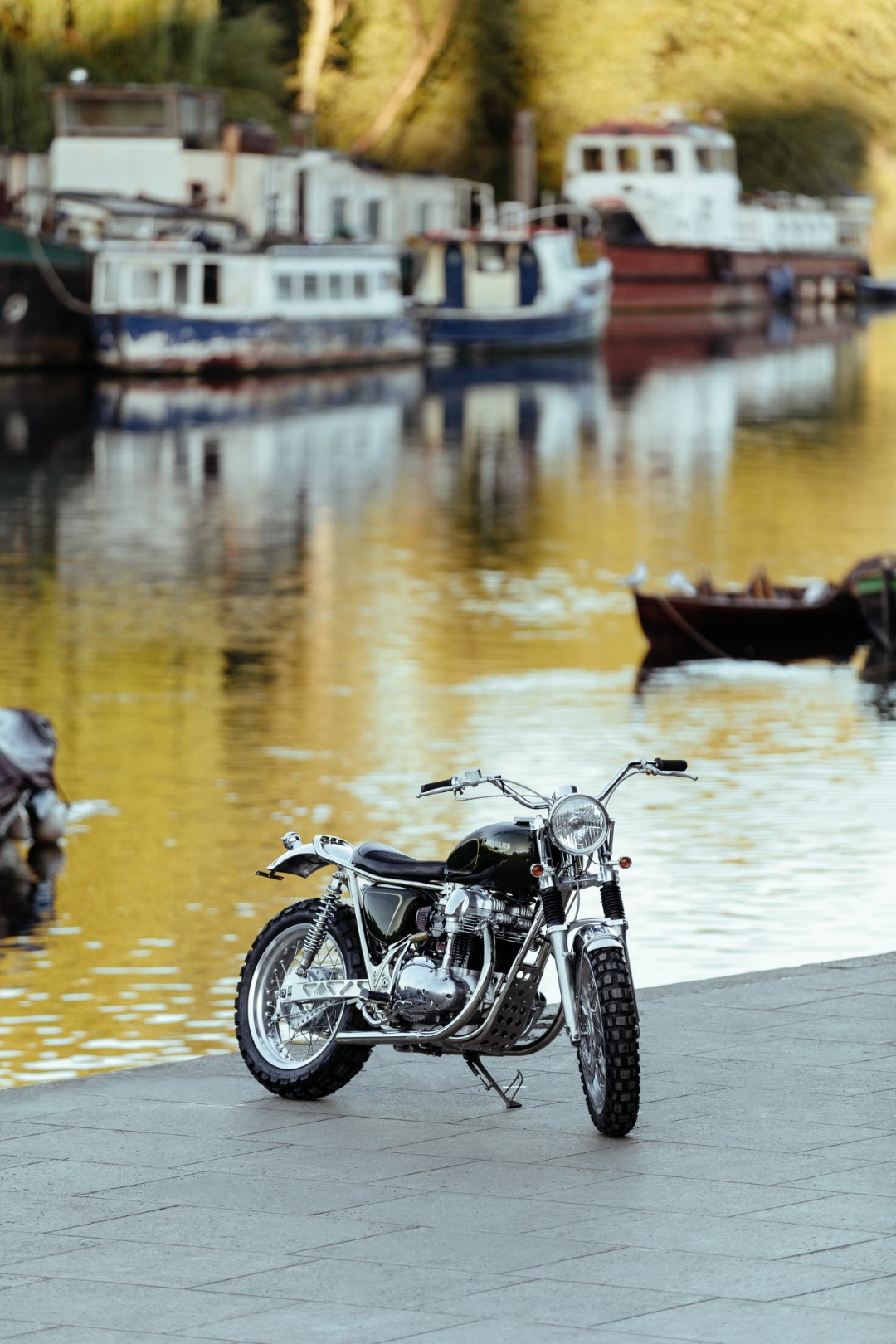 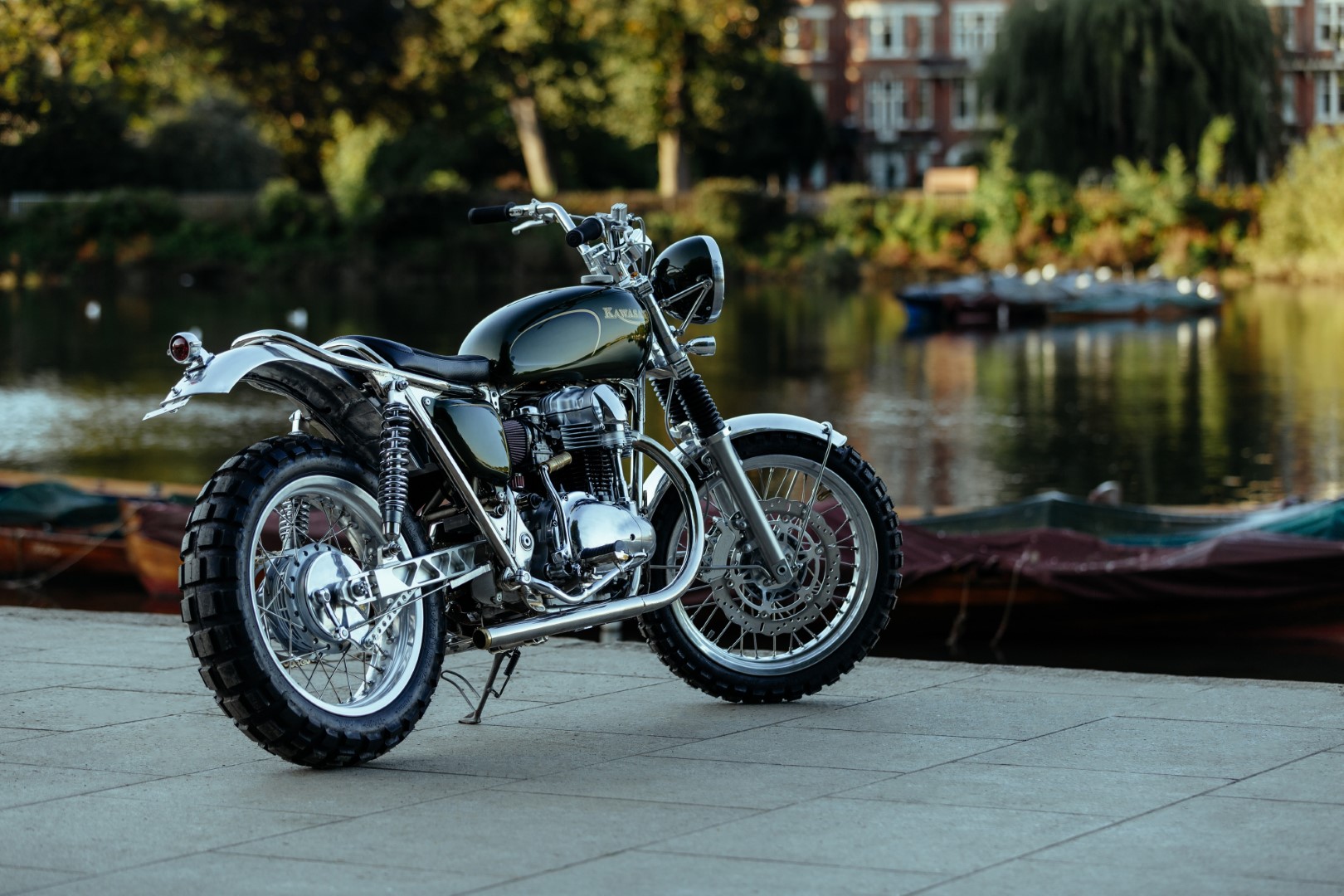 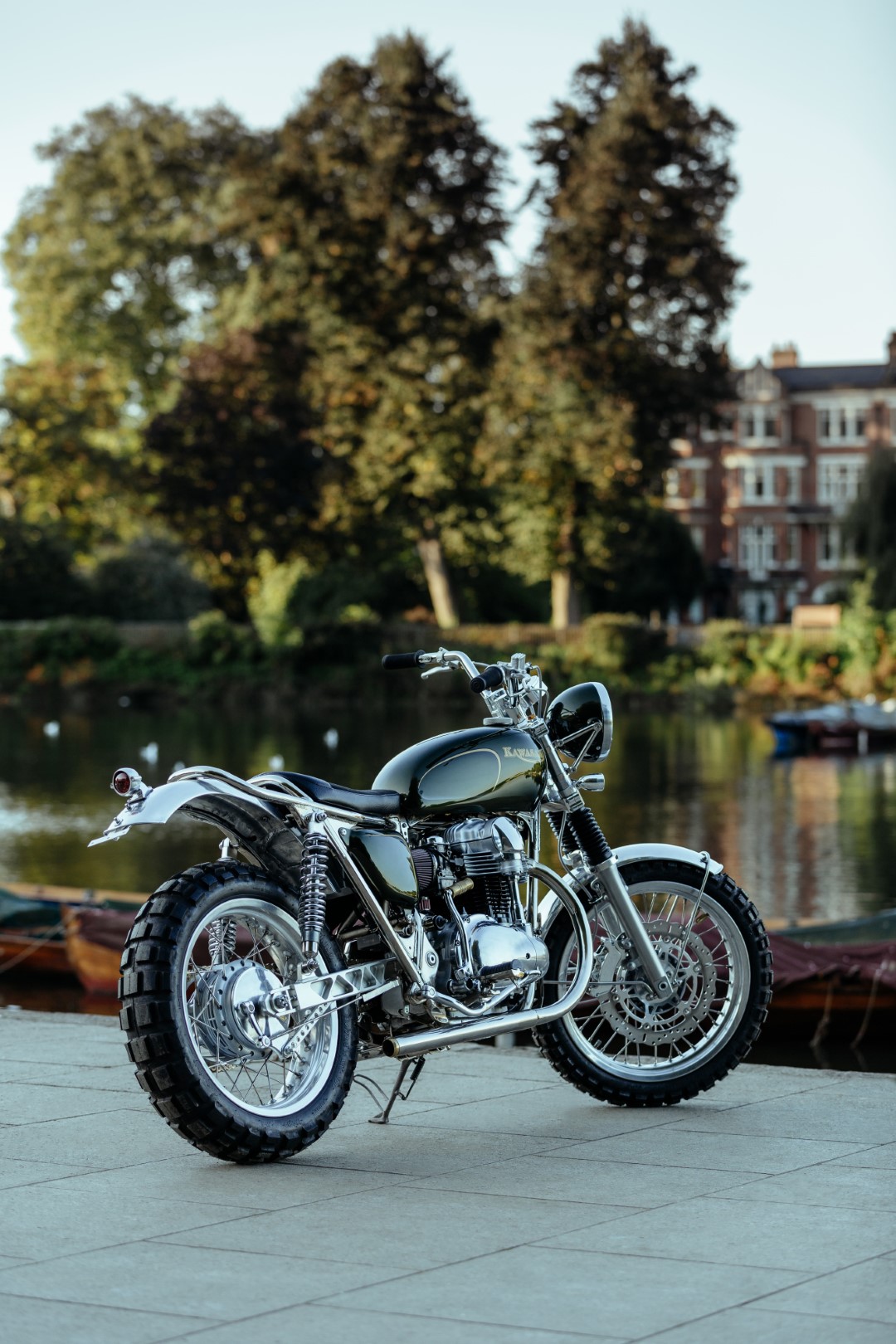 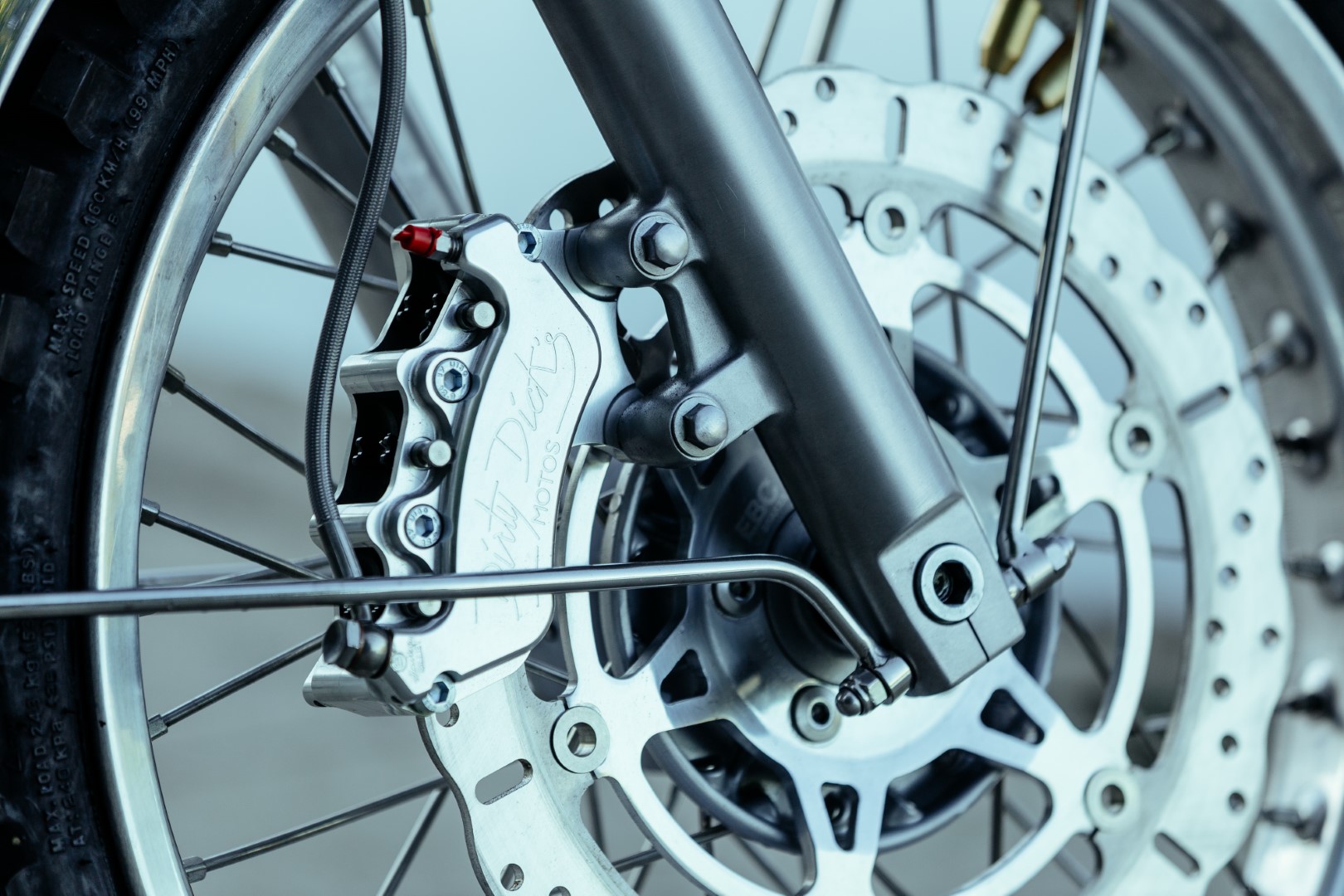 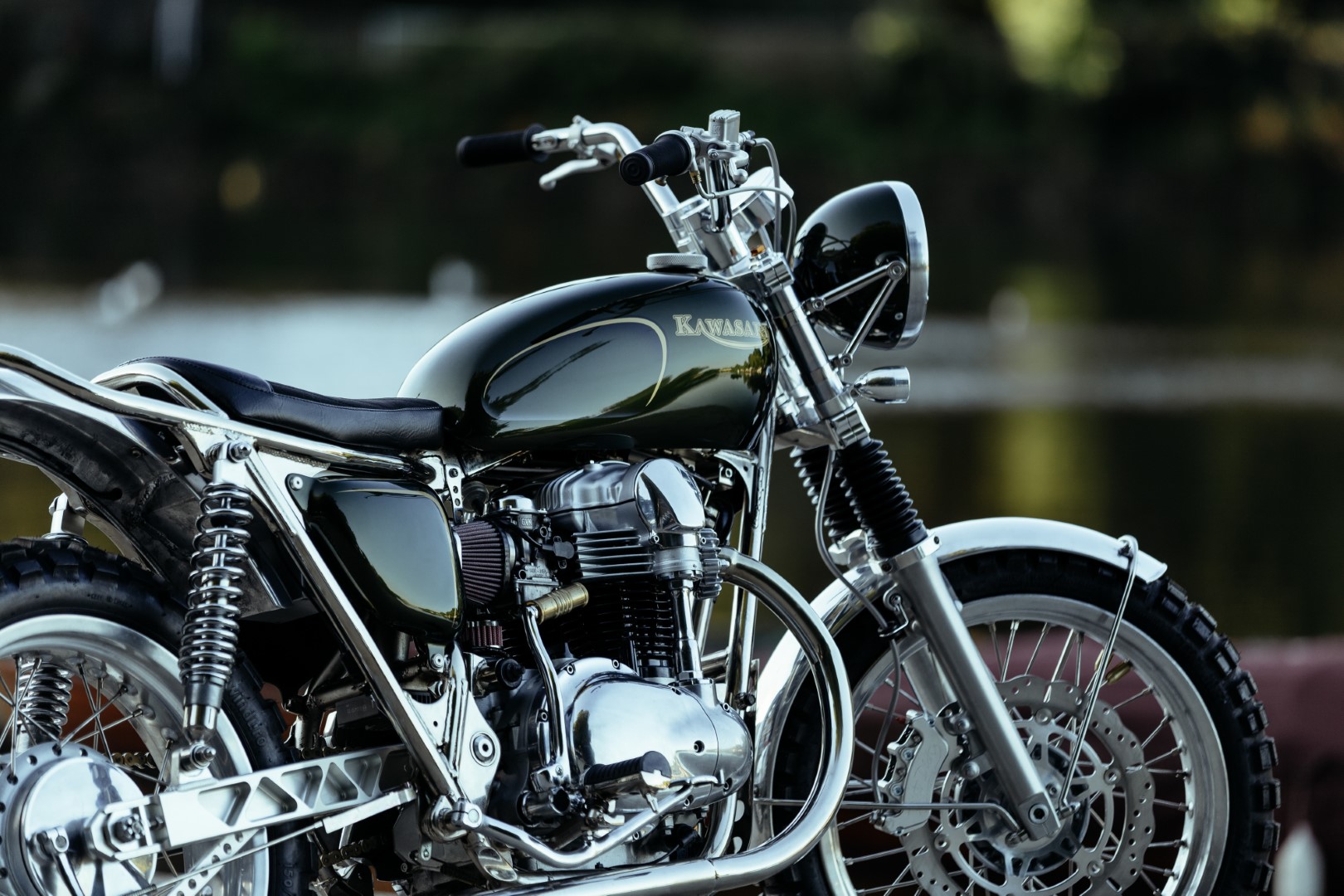 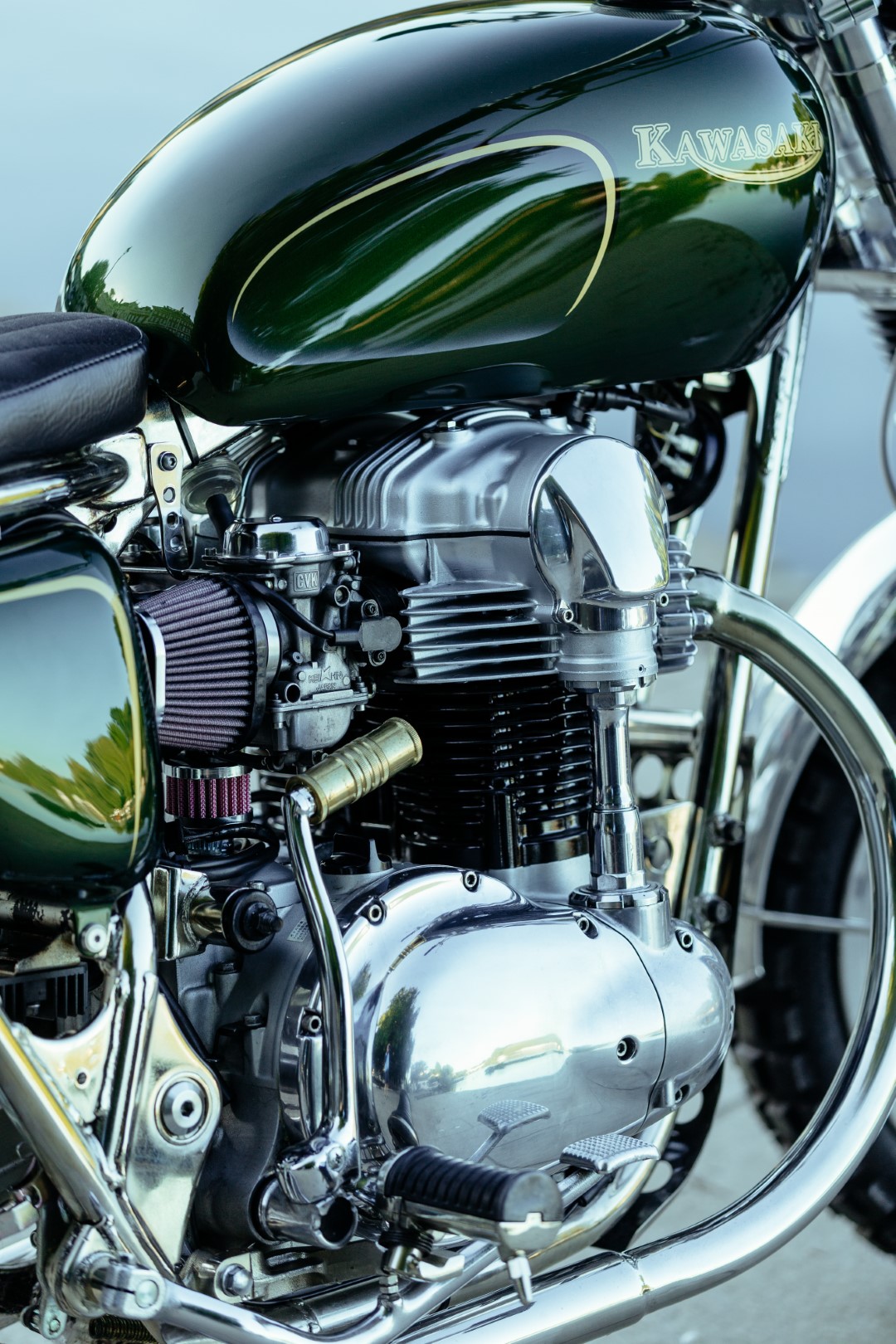 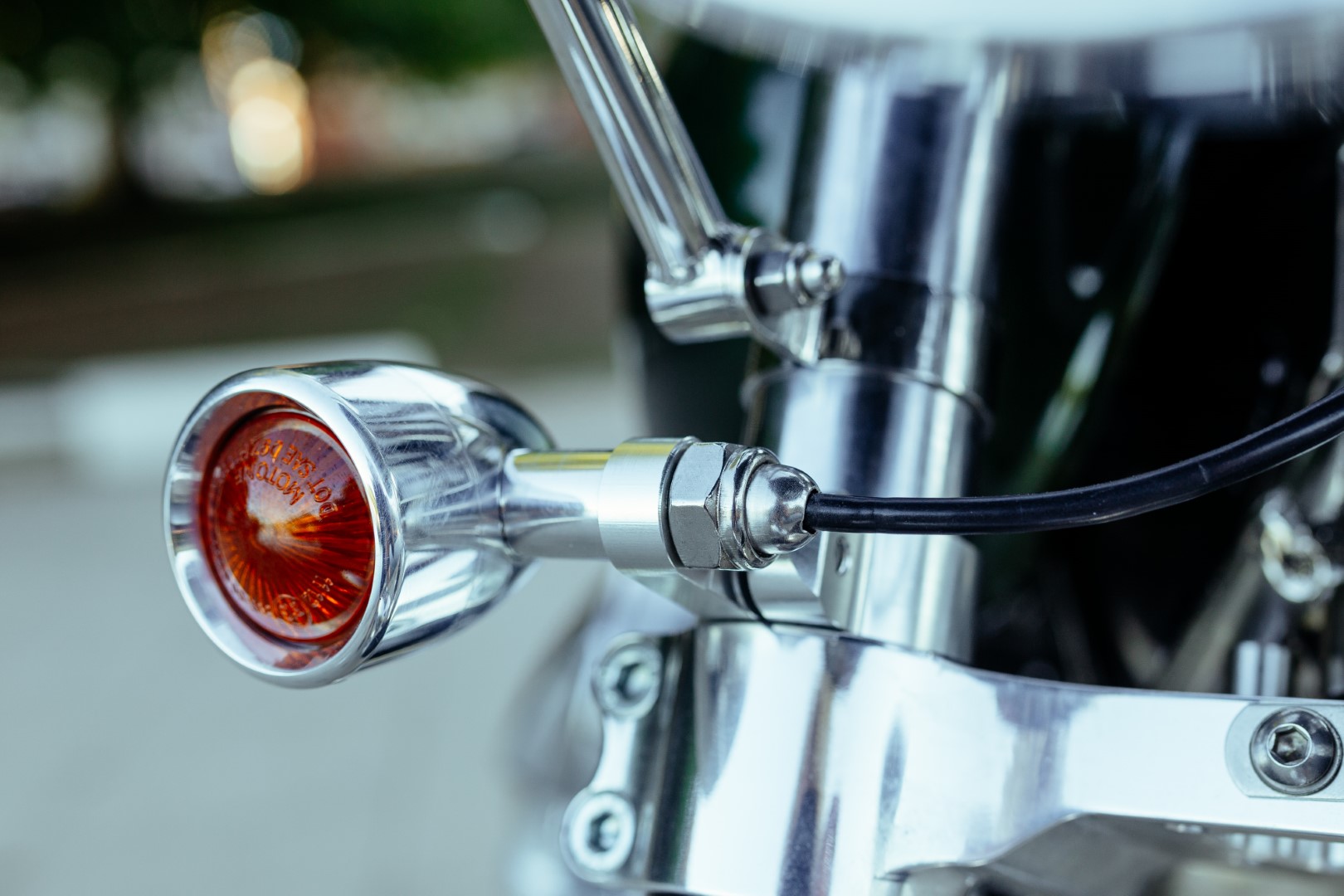 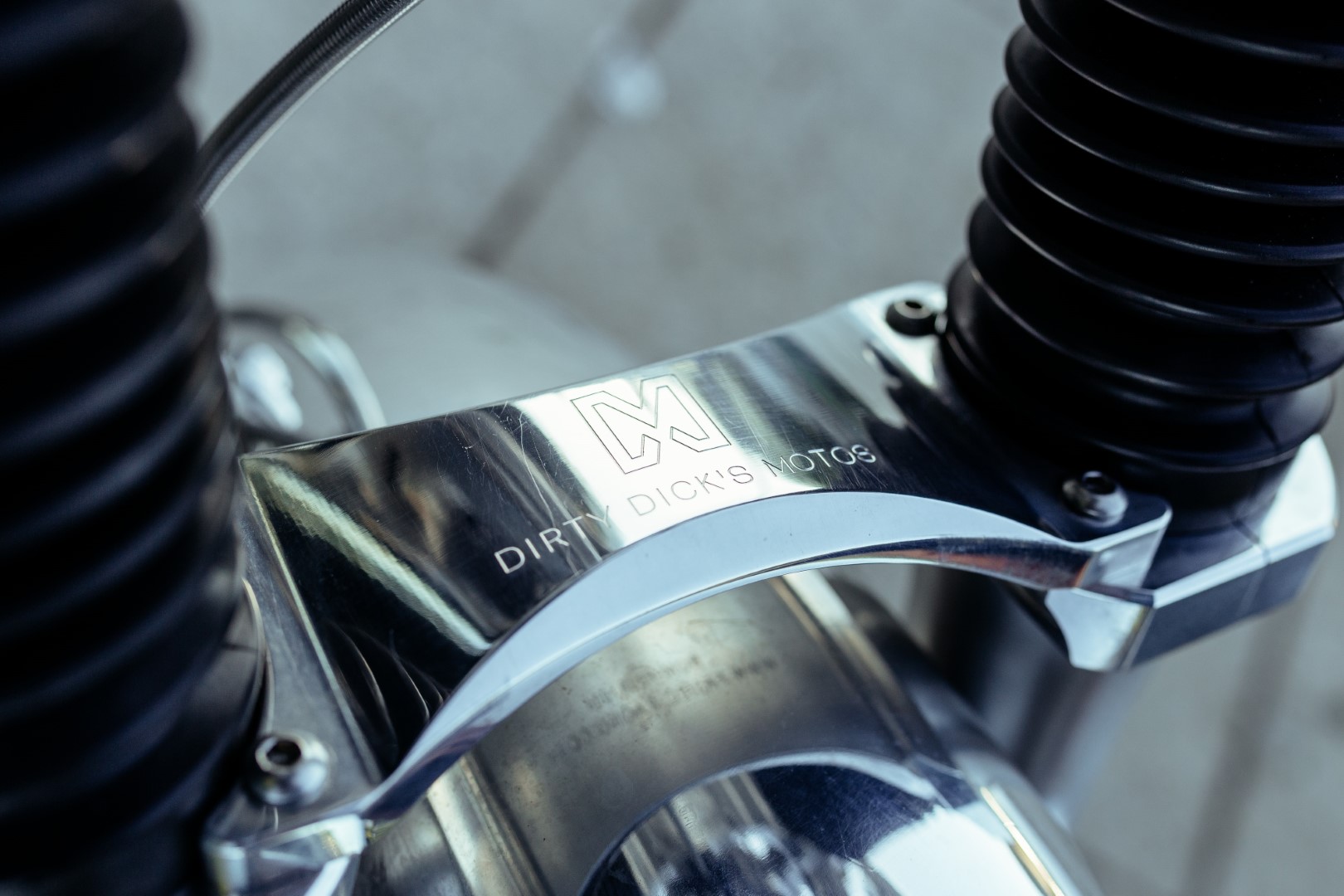 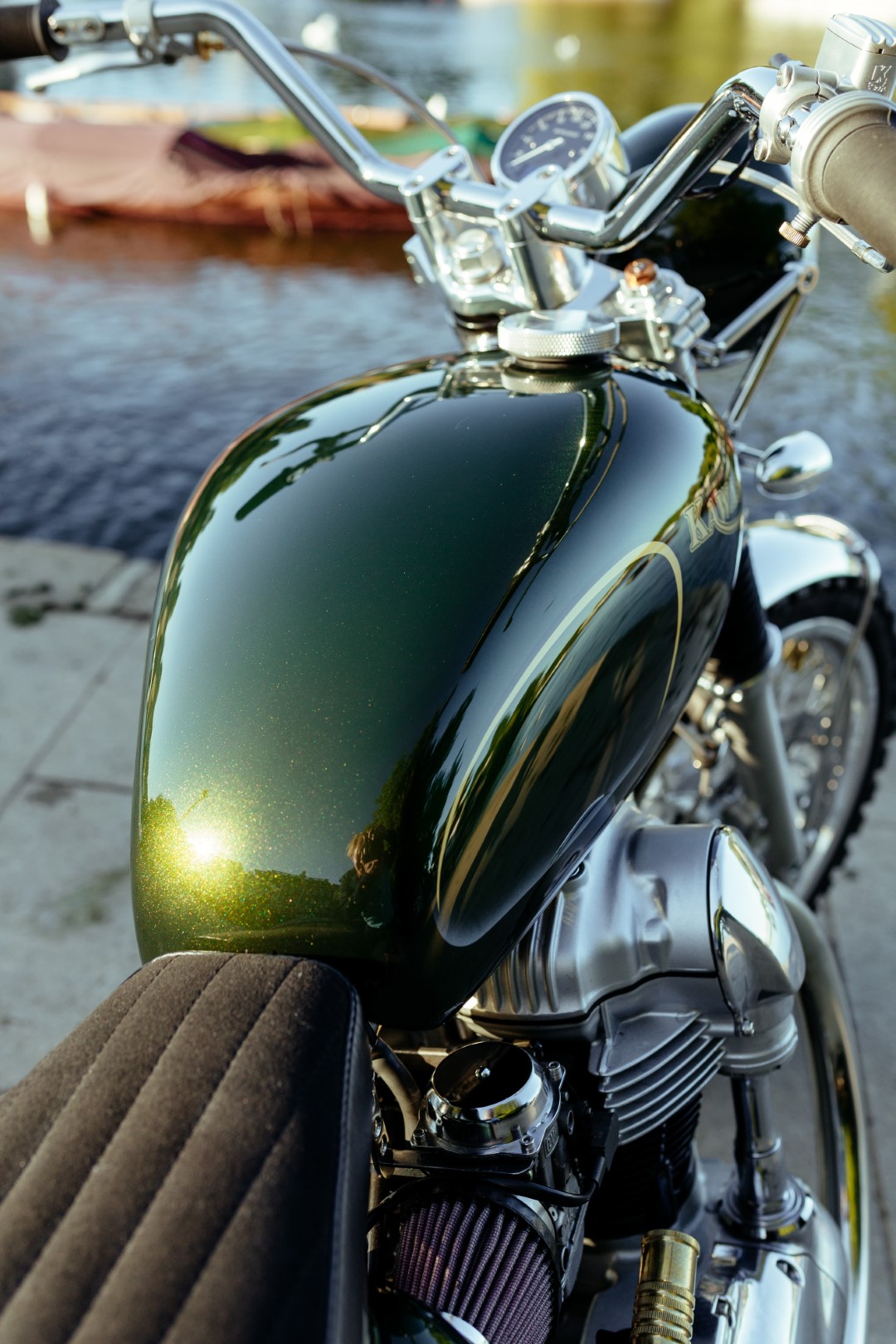 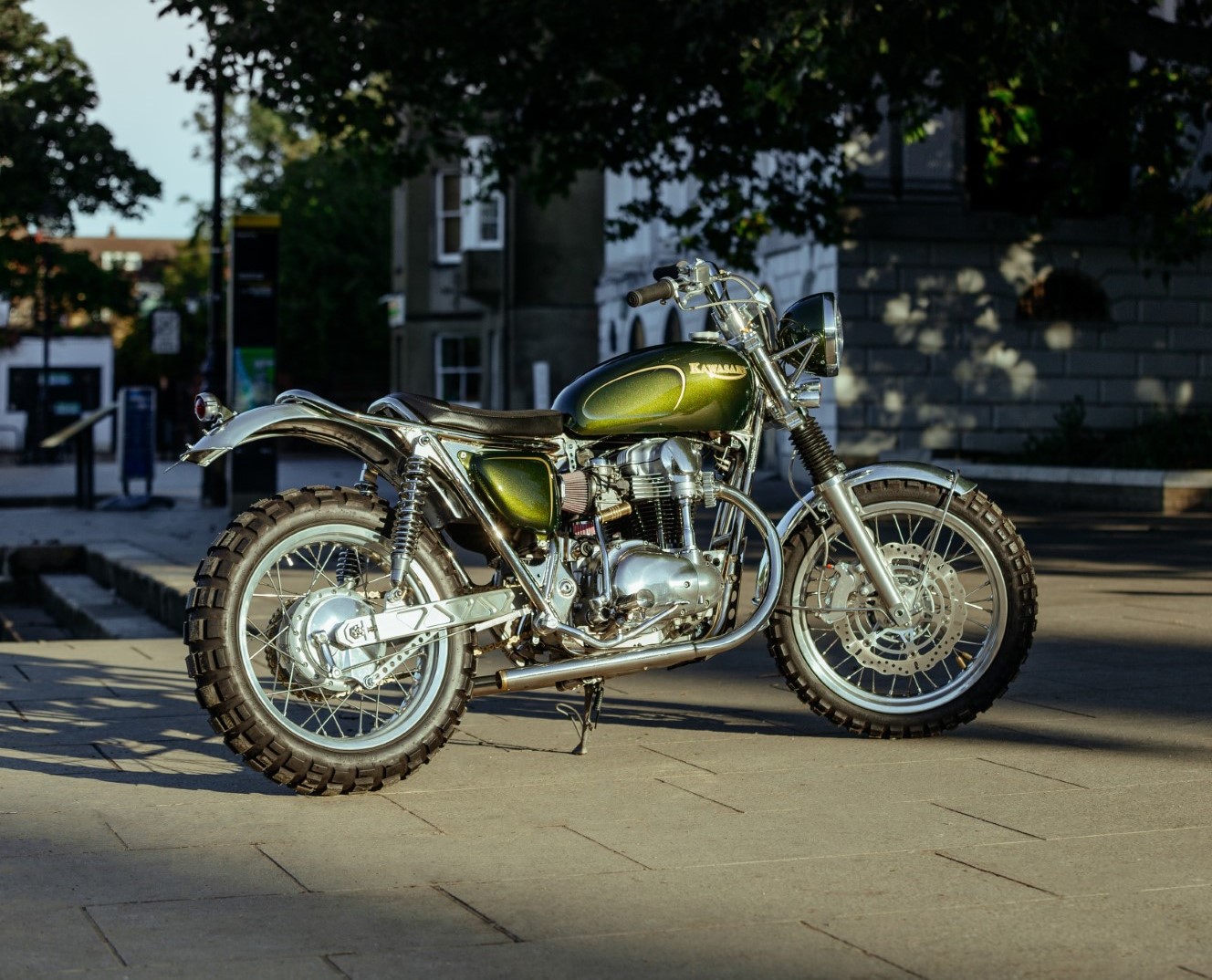 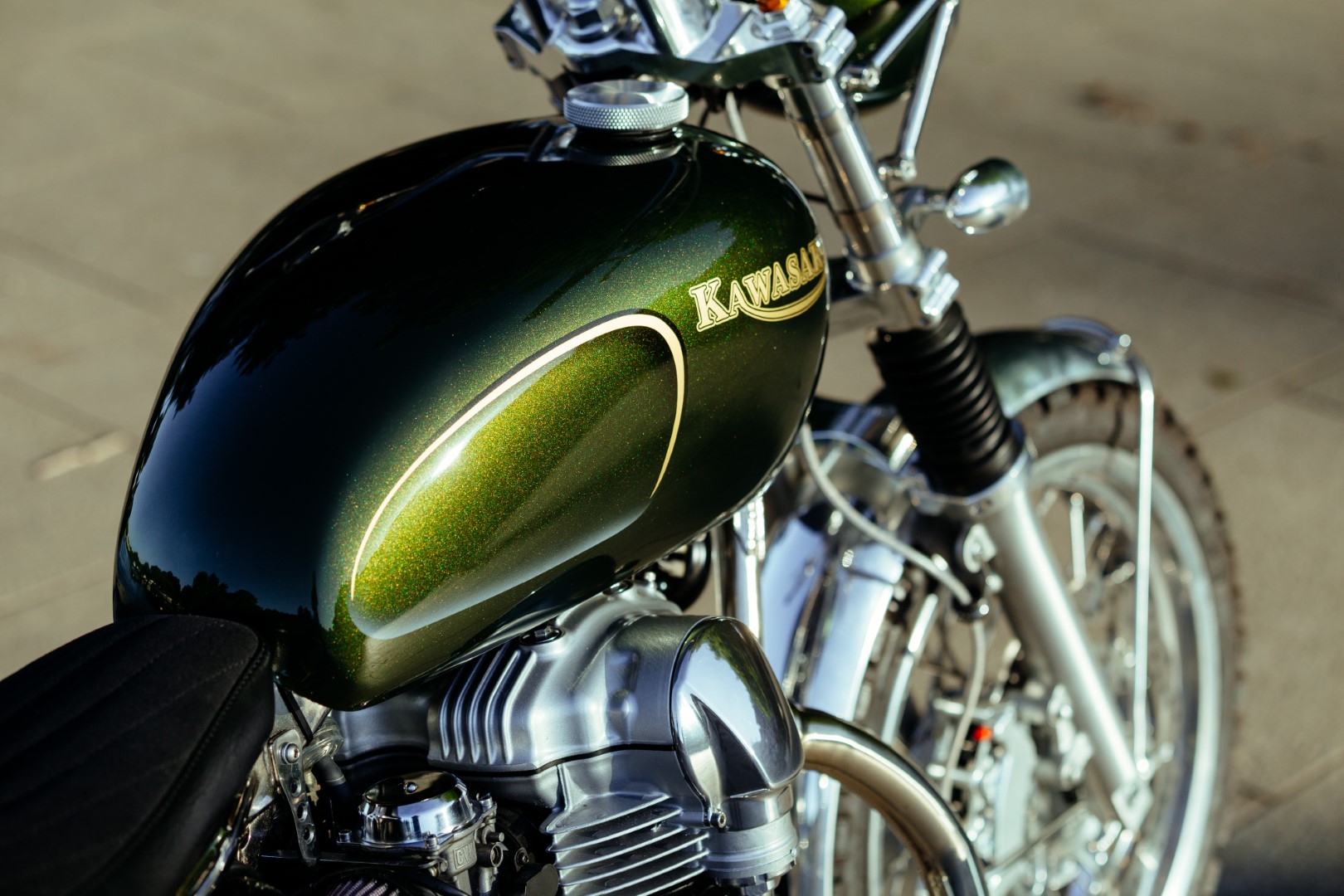 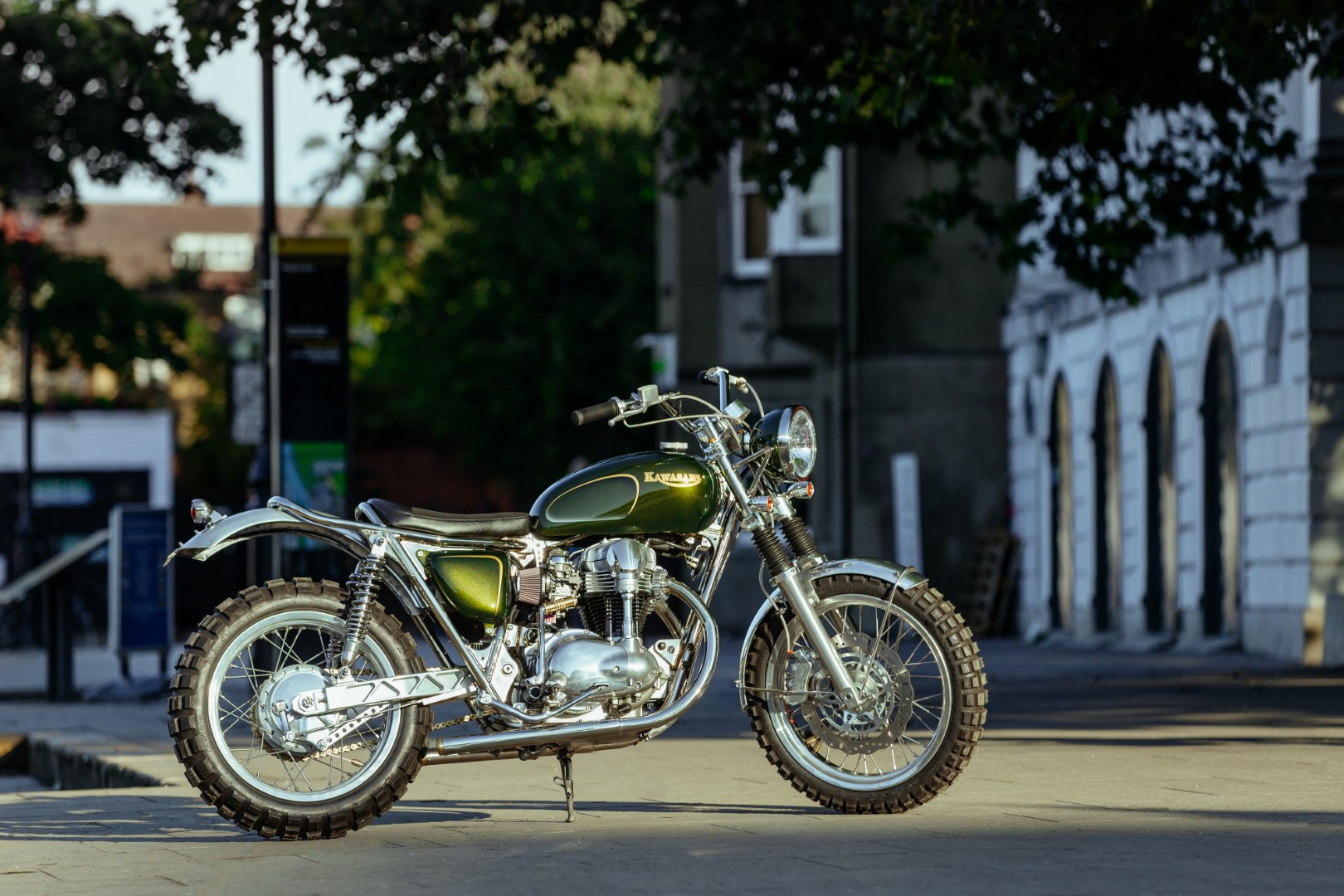 Newly built and featured on;

The album after the breakthrough is always the hardest, right? How do you build a better bike than the last?  It’s far easier to just build something different where you have no benchmark to beat, no hill of expectation to climb.  Just something new where you’ve let the creativity flow, see where it takes you and that’s where you end up.  It’s even easier to just build the same bike with a different colour and call it V.2 V.3 and so on.  The harder path is always going to be to take what you’ve built, keep what works the best, and try improve what you’ve already done.  This has always been my way of doing things – cars, bikes, houses, you name it, everything can be Better, Faster, More!  The Japanese call it Kaizen, The Art of Continuous Improvement, and with this in mind I set about building the next Sled.

As per usual this started with a donor bike, this time a non-running W650 that I picked up for a fair price.  The bike was in a generally excellent condition but didn’t run due to a botched tank lining job that had been ingested into the carbs and basically slimed every jet inside the carbs.  I suspect that this tank lining had a bad reaction to E5 petrol.  As usual, with any bike that’s 20 years old, it doesn’t matter how good it looks on the outside, it’s going to need all new bearings and seals as no one ever follows the routine maintenance.

After a complete tear down, the tank and frame were blasted, cleaned up of brackets and modified.  The frame was chopped and looped, this time without the integrated luggage rack.  The luggage rack was quite a marmite decision, generally polarised people.  This time round I wanted a cleaner and smoother look to the bike, so went more traditional.  The frame was then polished to a mirror finish and then sent for nickel plating along with a bag of smaller parts.

The tank has been seam welded to remove the ugly stamped-in seams that all modern bikes have, the fuel cap was patched and relocated to the right of the tank and a Harley fuel neck welded in.  Previously I had used a flush fitting Aero type cap, but in the spirit of tradition this time I used a nice, proud billet cap from Motone that looks the part but has a modern machined look to it.   The knee pads were removed, the holes patched, and the huge tank badges removed.  Once all this work is completed the tank cuts a lean and clean line, giving the bike a slinky wasp-waisted shape when looked at from above.

To complement the warm and classic looks of the nickel plating I have used a billet machined swingarm again.  Not only does it contrast nicely with the brushed aluminium, the triangular machined sections mimic shapes on the bike, which is pleasing to the eye.

The front suspension has been perfectly sorted out with some Andreani cartridge kits which now provide exceptional handling with adjustable rebound, preload and compression.  The fork lowers have been brushed to match the other parts on the bike and achieve a nice traditional look.  The rear is complemented with some custom-length Hagon shocks with billet tops and chrome springs, these are also adjustable for compression and rebound and work perfectly with the bike.   To create ground clearance to match the longer shocks, the front triples have a 25mm drop.  There is also a DDM front fork brace to stiffen up the front end.

The wheels had the hubs blasted and powder coated in silver. They were then re-spoked with fat Morad rims in 19x3.00 and 18x4.25 respectively, and wrapped in Continental TKC80s.  This time though I have gone a bit fatter on the back with a 150/70/18R tyre.  Although I have built this bike to look like a more traditional late ‘60s Sled, I still wanted it to be a little aggressive, so I went for a larger rear tyre which looks fantastic with the wider rear rim.

The brakes have been upgraded with the latest DDM Big Brake Kit. This is an EBC 320mm floating disk matched with a DDM 6-piston billet caliper for one-fingered braking.  I have used a Kustom-Tech brake master and clutch perch to suit the look.

To keep the ergonomics feeling sturdy and solid, I used 1” Western Bars again, but this time they’re full width for a more classic look.  All the wiring is internal with some microswitches and the typical Motogadget wizardry, although I have used a different RFID token system from Axel Joost as it uses less power than the Motogadget version.  The internal handlebar wiring now runs through the top riser and exits under the to triple for a cleaner look.  The battery is a Lithium Anti-Gravity with plenty of power to run the minimal circuit and starter motor.  The bike has a completely new wiring loom with all the extra wiring malarkey like clutch switch, kickstand switch, carb heaters etc. removed.

When it came to styling the bike, I was aiming for a late ‘60s Desert Sled mixed with some typical Dirty Dick’s Motos bling.  I started with a lower mudguard hugging the front knobbly tyre with fender stays connected to the fork lowers, then chose some rather sleek stainless headlight brackets that expose the round headlight nicely.  I deliberately kept the indicators lower down the forks to keep that beautiful headlight on show as much as possible.  The stainless-steel exhausts follow a more traditional shape, but have been gratuitously curved to follow a similar shape as the front mudguard and headlight.  This symmetry in shapes always makes a big difference to the overall appearance of a build.  To make this bike a bit sleeker than the last build, there are no engine bars, no high-level pipes and no luggage rack.  A simple and elegantly made stainless steel bash plate at the front emphasises the curves on the exhausts, and a slimmed down rooster tail has been slightly lifted to give the bike a hint of 1960s Trials bike.

In the shade, the paint is a very traditional British green for motorcycles, dark and moody.  I felt this colour was a bit of a risky move, as I usually prefer big, bold and bright colours, but I think it worked out incredibly well.  While it’s a deep green in the shade, barely highlighting the gold accents, as soon as the light hits it, the paint explodes with multi-layered gold flakes in the green.  It really is something special.

With traditional styling fused with modern technology and incremental improvements all round, I think this Desert Sled has embodied the spirit of Kaizen nicely.